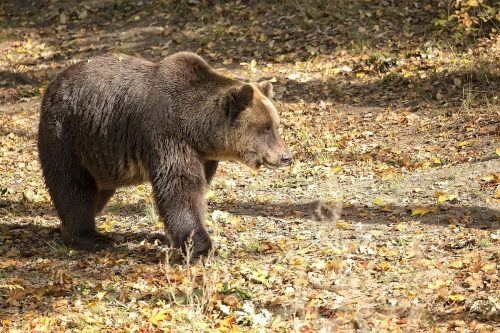 More than half of all brown bears in Europe can be found in Romania. This translates to roughly 6,000 bears that live in the country, with most of them located in the forests up in the mountains.

But these past few days, we have had news of various bear attacks – so many that you are tempted to believe that they are the norm here.

So I decided to share some facts and opinions on the matter and see if you should be afraid about potential bear attacks in Romania.

Despite the recent news, Romania can be considered a safe country where bears fortunately don’t roam the streets. Even in the mountains and more remote regions, bears don’t pose a real threat for most people.

Yet, in recent years, we found more and more bears making their way to villages or cities in Romania (all of them in the mountains). They also attacked sheepherders and have started to show more aggressive behavior that usually.

Of course, if you happen to see a bear or be near one – in the forests of Romania or in a city – you should definitely keep the distance and get away as fast as possible.

There is also a local alert system in Romania which, based on GPS tracking, will send people in the area warnings when bears are in the vicinity.

However, these alerts are not always on time. Still, they are better than nothing and should you ever get one, try to quickly find a place where you can get indoors safely or leave the area as soon as possible.

Why are there increasing reports of bear attacks in Romania?

Even though bear attacks are very rare in Romania, it is worth mentioning that at last two people have lost their lives to bear attacks in the past couple of years.

As for the reasons why more and more bears make their way to inhabited areas we have a lack of food as the main reason.

Due to climate change and massive deforestation, as well as other reasons, the Romanian brown bears no longer have the vast amounts of foods they once had available to them.

As a result, they get closer to villages and cities where they find the food in trash bins. Some of these bears then get lost in the city or can become panicked and attack humans.

There are security measures in place for keeping bears away from inhabited areas, usually in the form of electric fences.

But one of the fatal attacks that happened recently was caused by a repair work started on one of these fences, but not completed.

Should you worry about brown bears in Romania?

In most of the country, you won’t find any bears. They are located in the mountain regions, living in the forests there. And even up there in the mountains, chances to encounter a living bear are minimal, despite the recent increase in sightings.

So overall we can say that you shouldn’t be too worried about running into a bear during your trip into one of Romania’s cities. Still, you should be as cautious as you can, especially if you go trekking or hiking up the forests.

Usually, reports of bear sightings are sent quickly via phones and bears are dealt with quickly by the authorities and the overall numbers are still low.

It was a coincidence that we had some serious attacks in just a few days and definitely not the norm.

So definitely, if you’re planning to visit Romania, don’t put plans of hold because of the fear of brown bears. Instead, follow my recommended itinerary to enjoy the country at maximum levels.

Or, if you really want to be 100% safe, simply stay away from the mountain regions in order to be away from the wild animals. But even there, I repeat, chances are as close to zero as possible to run into a bear.

6 thoughts on “Bears in Romania: Are They a Real Threat?”