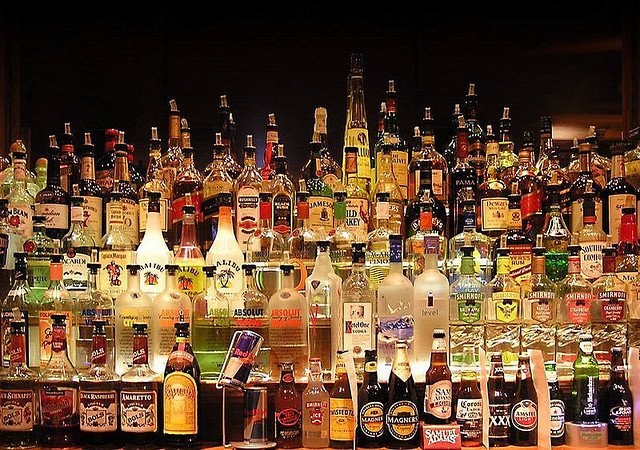 (Well, this actually happened on Saturday but now that my headache’s gone and my mind is clear again, it’s worth writing about. Because each experience should be an experience you learn something from. At least.)

I guess that few people could say that there’s much to learn from getting drunk, especially when it comes to personal finance. But today I want to turn myself into a fortune teller with an empty bottle instead of a crystal ball and tell you the lessons I’ve learned from getting drunk with my friends. So, here’s the story:

A good friend from high school that I haven’t seen in ages came back home for a short visit and invited me out. It was going to be a nice and quick evening out as we both had families waiting at home. Despite having good food at home, I decided to go crazy and I bought a hamburger on my way to the pub – after all, there was no wifey with me to remind me that it’s unhealthy and doesn’t go well with my quest to lose weight.

When we got to the pub, there was a huge surprise waiting for us there: two more high school friends were sitting at a table, looking at us really surprised. It was fantastic, there was a lot of catching up to do and with the bottles of beer getting empty one after another, I realized that we might have a long night ahead.

So before getting too drunk, I had a small moment of responsibility and decided to put away a chunk of the money I had on me (here in Romania we pay mostly with cash) – in my back pocket. I didn’t want to spend ALL my money on drinks.

It seems that I knew my friends well: they soon decided to switch from drinking beer to doing tequila shots and as if that wasn’t enough, it was all followed by a few glasses of whiskey and/or vodka and God knows what… Fortunately, I have decided not to mix drinks up and I sticked to beer, to the disapproval of my friends. I knew that if I was going to mix then I would suffer a lot more the following day and strangely I had the power to say no.

When I finally realized that I had managed to drink away all my money, that it was getting late and I was way too drunk to get another beer, I decided it’s time to call it a night. My friends considered that they could still have fun for a few more hours and decided to stay there, so it was going to be a long, miserable walk home for a drunk shambler freezing to death.

Right now, it doesn’t seem that there are many financial lessons here, right? But there’s actually a lot of them and I will make them clear below:

1. The hamburger can be seen as an investment. I had no idea that I was going to need it, but in the end it proved that I did: if I hadn’t eaten it, I would’ve felt even worse because of the alcohol messing up with my body. I didn’t feel it’s effect instantly, but it helped in the long run. Just as it happens with investments in real life.

2. When I decided to put away some money in order to avoid drinking them all (I know it doesn’t sound like a lesson to tell to your children, but it’s true) I actually decided to save some money. Put some away, even though I could’ve spent them all without feeling any immediate effect. Let’s say that this was like a savings account or an emergency fund.

3. Although my friends went all crazy with tequila and whiskey, I decided to stick to my cheap beer – I only drank that and nothing else. As a result, thanks to my investment early on, I was in a relatively good state the next day. After talking to my friends on the phone, they were all miserable and had the mother of hangovers to deal with.

Lesson learned: being frugal is a matter of choice and it’s generally the best option. Also, trying to keep up with the Joneses will just make you sick and miserable.

4. Finally… my long, horrible walk home. I was alone and I could barely walk and it was really cold outside… it was a nightmare! I had no money for a taxi because I drank them all so I really had to walk, there was no other option. But then I remembered about my “emergency fund” in the back pocket. I almost started to jump around with joy: I had money for a cab ride home and it was the best thing ever. Lesson learned: emergency funds will REALLY help you!

And it was not just financial lessons that I have learned: when I got back home, I found my wife playing with my three months old son. They were simply adorable and my wife told me that he was in a really good mood the entire evening, smiling and laughing and having fun and just being awesome.

At that moment, I got sad realizing that I wasn’t there with them, having fun with the little one in what was the first time when he was so playful for such a long time. Then I realized that all the fun in the world can’t be as fun as the time spent with family. Which is all free. And there are no headaches the next day, either!

17 thoughts on “Financial Lessons Learned after Getting Drunk Last Night”