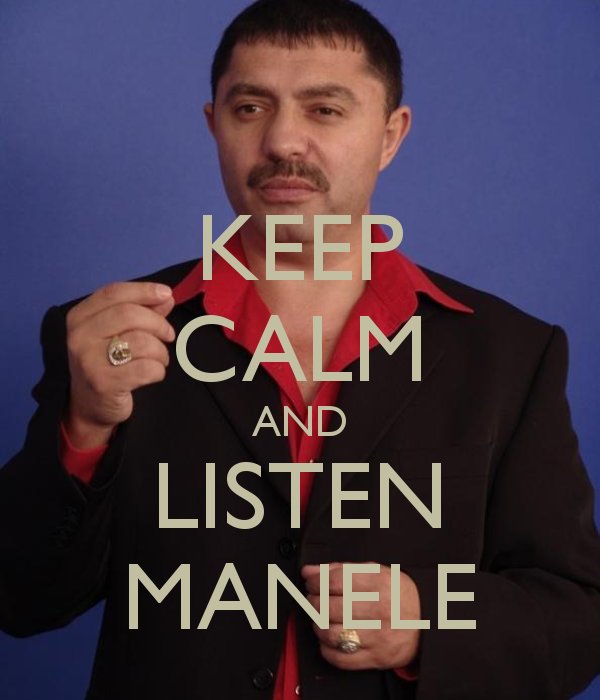 One type of music that you might hear a lot while in Romania (or not hear at all, depending where you go) is manele. This genre is an extremely controversial one here in Romania, one that reached its popularity peak in the late 90’s and early 2000s, but one that is still very popular today, although due to the public’s pressure, it’s no longer as mainstream as it used to be…

The genre has origins in traditional party music, called mahala music (or “lautareasca” music – the original manele) which started in the late 18th century. Usually played by Roma people with a live band, the old manele had Turkish influences and were considered Oriental Music. This type of music was usually played at parties and in bars.

This is what made the genre extremely popular, but apparently that’s not enough to keep it that way. The problem with manele is that their lyrical content is extremely weak and filled with grammatical errors. These are unintentional, being a result of the authors and singers being uneducated individuals with a good voice.

However, there are still places dedicated to manele only and many Romanians still believe that you can’t have a real party without manele music – so weddings, birthdays and other similar events “must” have manele performers invited or at least some manele music played.

We’ll start with THE one song that marked the entrance of Manele in the mainstream media and is one of the most famous manele songs ever. Its rhythm is not that great, but they lyrics were spot on for many as the singers complain about their difficult life (the chorus is something like: “ooooooooooooh, my life, oh, my heart, oh, I can’t stop crying, I am very unhappy”). Also note the huge crowds! This is how big they were (and still are in some areas):

In this case, we’re talking about a song whose original title I can’t remember, but we’ve had manelized versions of Rihanna’s Man Down, the classic Informer from Snow and many, many more. In most of these cases, the lyrics themselves are hilarious – sometimes without it being intentional.

Now moving to more recent manele songs, we can notice some tries for improvement and updating to more modern times. This is obviously a broken heart song, with lyrics like: “Your burned my heart down. Why did you do it, you destroyed me. You promised you will never leave me, you swore to always love me”

These are actually written by a composer and the song is veeery different from regular manele music and can be considered more of an experiment by the artist (which is one of the most popular manele singers at the moment). Still, it has painfully simple lyrics, but the type that others can easily relate to.

Note: the video can no longer be embeded, so you can check it here on YouTube.

So, that’s what manele are all about. I am sure that you can’t understand the lyrics, but in terms of sound… are they enjoyable? Could you see yourself dancing on one of these songs (maybe the last one?)