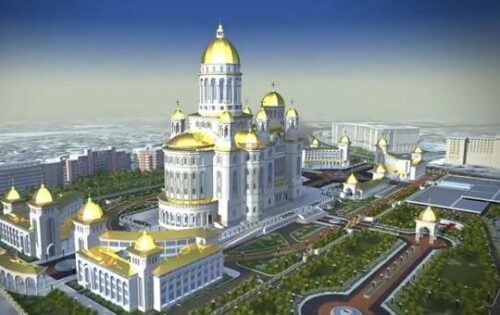 Ceausescu has left behind, among many other horrors, the Palace of the Parliament / House of the People / Casa Poporului, a mammoth of megalomania stretching over 3,700,000 Square Feet and going 86 meters up.

For some reason, the Orthodox Church decided that they should leave their mark on the country as well and started another similarly hideous project, called Catedrala Mantuirii Neamului (People’s Salvation Cathedral).

And you can take that name literally if you think that the zombie apocalypse is coming, because the new cathedral will be horribly humongous.

Apart from that, it’s nothing that a huge pile of megalomania, bad taste and poor choices. And, as if one wasn’t enough – it’s being built right bear the Palace of the Parliament.

Building started back in 2010, and it’s estimated to be ready in 2020. It will be the tallest Orthodox Christian church in the world when completed, a mammoth that will have place for 6,000 worshipers, but also a restaurant with 1,000 places, two hotels and parking for 500 cars. Because, well, maybe you will want to stay in the Church’s rooms…

The People’s Salvation Cathedral, once built, if fully populated, is said to be able to hold 125,000 people. That’s way more than the entire population of my city! And completely disgusting at the same time.

It is pretty obvious that the building has the potential to draw in some visitors to the country, but I always believe that it’s best to be smart and attract people with beautiful, impressive things – not just size.

Apparently, the Church and Romanian Government didn’t agree and decided to invest 300 million Euros in this project, probably because the country has too much money invested in all areas anyway… (sarcasm off).

Here’s a video showing the mammoth cathedral in its current state: it’s 27 stories high right now (And what you can see in the back is the House of the People): https://www.youtube.com/watch?v=u_EaViqSMs8 (you have to open the link in the new tab as the one who published it, for some reason, decided not to allow embedding it on other websites).

Here’s an official presentation video if you are interested in finding out more:

When completed, the People’s Salvation Cathedral will be 123 meters long and 125 meters high.

The Church still has an extremely important role in Romania, with most people living in the villages (and many living in the cities) considering priests and the Church itself as the people/places to go to when they need advice.

The Church itself is heavily involved in politics, there are special tax rules (no tax, actually) for the Church and so far no politician wants to break the bonds and help the people evolve because it’s pretty simple: the Church can easily manipulate the people and the politicians need that.

However, it’s pretty obvious that the People’s Salvation Cathedral will become soon just like Ceausescu’s House of the People: a bad memory of some not so great times when people could not or were not allowed to think for themselves.

And yes, the fact that they’re so close one to each other makes absolutely no sense… but that’s how things sometimes happen in Romania.

What do you think about the People’s Salvation Cathedral? Is it something you’d like to see once ready?