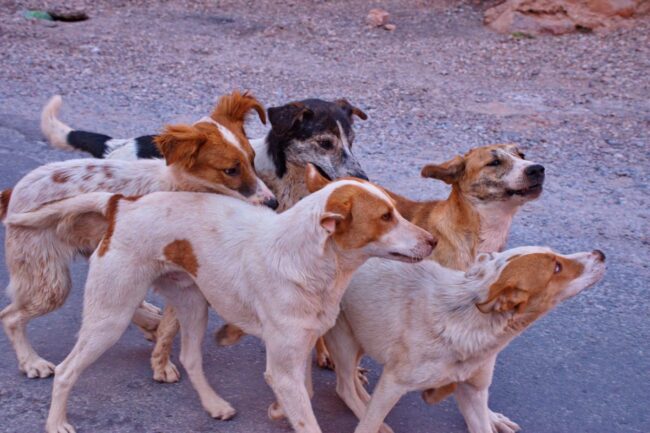 In the past, Romania managed to become (in)famous worldwide thanks to its stray dog problem (among other things, of course). It wasn’t uncommon to see groups of stray dogs roaming the streets and even attacking pedestrians.

There are a lot of people who think or worry that Romania might be a country where packs of stray dogs still roam the streets and are ready to attack anybody who crosses their path.

This is fortunately not the case for most of the country. Today, we’ll get a bit more in depth with this and talk about stray dogs in Romania.

Does Romania Have a Lot of Stray Dogs?

Fortunately, there aren’t many stray dogs left in the country. Some cities will have more than others, but generally, the situation is under control and you can spend a week in the country without seeing any strays.

In reality, things are much different (and improving on an yearly basis). Although Romania hasn’t completely managed to deal with this problem, things are much better now than they were decades ago when, in some areas, it really was dangerous to walk because of these dogs who could get violent

I remember that in my home town, there were some regions that everybody knew and avoided, because the dogs took over.

It was so bad that even now, so many years after, I am still afraid of going jogging in the largest park in the city because that is where the dogs used to hang out. I haven’t seen any in years, but the trauma remains.

The same can be said about most parts of Romania, especially the ones that tourists are most likely to visit: chances are minimal that you’ll run into a stray and there’s even less of chance of seeing a pack of them.

And most of the smaller cities are in a similar situation: many of the stray dogs have been neutered and tagged, although there are still enough roaming the streets, with some areas being worse than others.

Many people still don’t afford to have their dogs taken to the vet – or they don’t want to – and end up with too many puppies to handle and eventually release them on the streets.

But these practices are also slowing down, fortunately, helping to keep the overall numbers low. The authorities are starting to take measures also, making neutering mandatory and raising the fines for those who release puppies on the streets.

I wouldn’t personally go as far as saying that, but I do agree that compared to my youth, there are almost no strays left around.

Sure, seeing one here, one there, roaming the streets, might still be considered too much by most people, but at least the packs that some are worried they might see are generally gone.

During a quick visit to a nearby small town called Vanju Mare (exploring the area around our village house in Oltenia), I saw the largest group of dogs I have seen in many years.

Probably 6-7 dogs were just chilling in front of an apartment building, completely ignoring all passers by. You can check out my video below if you want to see a bit of the city (as well as the strays):

Actually, one of them was so happy to see us that she came over, wiggling her tail and begging for attention.

I believe that these were dogs that people in the area fed, so they were friendly… but still without a home. They weren’t tagged and one of them seemed to have puppies, which was even sadder.

So let’s move to Constanta! This is our home for the past few months and I have to say that I was surprised to see more strays here than in other cities I have visited.

I don’t see them very often, but on two occasions, in two different areas – once around the beach and once close to the city center – I actually saw packs of maybe 7-8 dogs roaming around.

While they were not violent… it’s still scary to see that. So the problem still exists and I would say, based on personal experience, that in some cities it is worse than in others. But overall, things are much better than 10 or 20 years ago.

19 thoughts on “Stray Dogs in Romania: Are They Still a Problem?”

Leave a Reply to B Cancel reply