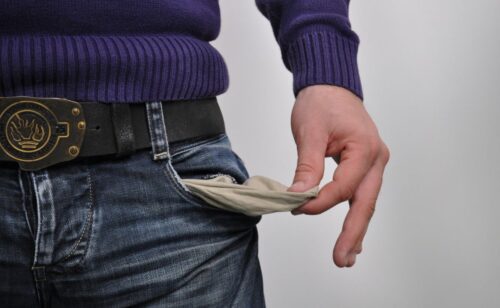 Romania is one of the cheapest cost of living countries in Europe. But is it possible to live on $500 per month in Romania? While this is going to be a bit extreme, it can be done. It won’t be pleasant but as you will see in today’s article, there are many people and families that do it.

We have already talked about living on $1,000 per month, which is a bit easier and offers you a better lifestyle.

I receive a lot of messages from people asking me what would the minimum budget be for living in Romania, and I decided to share the story of some people I know who are living as a family of four (the children are 3 and 5) on roughly $500 per month (2,150 Romanian Lei).

And there are other families who manage to make it work with such a low amount each month, as well – but I don’t personally know them.

As you can imagine, the family I am talking about doesn’t live the glamorous life of superstars and things are really tight budget-wise.

The story of a family living on $500 per month

Although they didn’t have exact numbers to share with me, they did say that the biggest expense was, as expected, food. They estimate spending between $148 – $198 per month for food (we spend almost double that amount and it’s just three of us!).

In order to keep costs low and have a somewhat varied diet, they always keep an eye open for discounts in the large supermarkets, they buy in bulk to get the lower price per kilo and they always go for the cheapest products – store brands (which are in most cases not that bad quality-wise).

Bones for soups, chicken for meat, vegetables and fruits bought from the peasant markets, canning their own food – these all help keep the costs low and the food as varied as possible, even though the bulk of their food is made of potatoes, rice, pasta and mamaliga (the traditional Romanian polenta made from boiling corn flour in water).

So they do manage to keep things relatively varied through these methods, although they only cook from base ingredients and stay away from sweets and candy and everything else.

They live in a one bedroom house which does get crowded at times, but also helps them keep costs really low. All the housing related bills, including electricity and garbage collection are between $40 – $50, a bit higher during the winter. Of course, they are careful not to waste water or electricity, for example

They have the advantage of owning the house, so they are not paying rent or mortgage, but are not (for a reason I don’t really understand) growing any vegetables in the small yard they have, nor do they have any livestock. I believe that would make it a lot easier cost-wise.

They buy most of their clothes from thrift stores and try to care for them as much as possible (patching them instead of getting a new one when holes appear), they don’t have expensive smartphones to keep the bills up and they try to recondition and repair stuff that gets broken instead of buying new.

They don’t have a car, but fortunately the city is small enough to allow walking anywhere: usually, you won’t spend more than 25 minutes getting from one end of the city to the other, but most things are a lot closer.

So they walk a lot (the husband has a bicycle though) and they manage to stay in shape this way. It gets tougher when the weather is not nice, but they’re getting used to this.

They don’t afford to go out and they told me they did not have a proper holiday since their first son was born (which means at least 5 years!) but they do take some weekends off to go to the country side and very rarely to a picnic.

Still, they can afford to treat their kids with ice cream during the summer and even go “crazy” on a monthly basis and order pizza.

They live a simple life and somehow manage to make it work even though they have a tiny budget. They keep their chins up and don’t allow themselves to be discouraged by the current situation.

Their biggest problem, though, is that they don’t have any real money put aside and any emergency (like oven or fridge breaking down) would really hurt them.

But somehow they managed to make it work for the past few years and they are confident they can keep going. And they always seem happy when you meet them.

Why are they living on such a low income? Salaries are really low in Romania, despite increased wages in recent times. The husband is the only one who’s working, while the mother stays at home taking care of the children.

She’s trying to find a part time job now that they’re both going to kidergarten, but things are not easy. She does help some families with cleaning and other house-related stuff and earns a bit of income from that, but it’s inconsistent and low.

Their budget might be, in the end, a bit over $500 every now and then, but I don’t think that they ever go over by a lot.

So it is indeed possible to live on $500 per month in Romania, even as a family of four with proper planning and keeping everything to a minimum.

They do have the advantage of not paying rent, but eventually, if you really have just this amount per month, you might make it work. But it would be really difficult – as it is for the family in question and it would mostly be surviving, not enjoying life.

Remember that as a foreigner moving here, you will have additional costs (unless you are employed or a student, you would have to pay your own health insurance, you would have to pay rent and other fees) so really making it work on $500 would be even more difficult than it is for this family I know. I would go as far as saying that it would be impossible.

However, if that would be the same amount you’d have to live on in a country in Western Europe or the US, for example, you’d surely get a lot more for the money here! But don’t expect it to be easy!

Most people writing about the cost of living in countries that are considered really cheap ones to live in usually forget some of the expenses and the fact that foreigners need time to adjust to the new living conditions.

I don’t want to make it sound like you could live like a king here in Romania on $500 a month and I would never recommend anyone to move here with such a small budget. Even $1,000 would be a bit difficult for most people, so things are not as cheap as some might make them sound.

But if you are on an extremely limited budget already and living in a more expensive country, then you might live better here than there. Just try to do the maths, see how things look on paper, double check them and then give it a try, even though it won’t be easy!

It will be easier for EU nationals because it’s easier and cheaper for them to get the residence permit. For people outside of the EU, getting a residency permit here would involve additional monthly costs, as well as health insurance that would make living on $500 impossible.

My take on living on $500 per month in Romania

As you probably know, we have recently decided to move (at least during the summer) in a village here in Romania. And I think that most people in this village live on less than $500 per month.

Sure, they have the big advantage of owning a garden, maybe growing some chicken and other farm animals and have most of their costs covered. But it is very clear for me that it’s not easy.

We have personally realized that our monthly expenses were extremely low since 2020 began. This is not because of moving in a village here (at the moment of writing, it’s not even a month since we moved) but because of the entire mess that the world is in.

As a result of staying mostly at home and having no distractions (and no extracurricular activities for our son), in the months of April and May we had some insanely low expenses. On average, in these two months, we only spent $815 per month. This is a bit over $400 less than what we normally spend and I was very surprised to realize this.

The biggest “Evrika” moment that I had when I checked our monthly expenses was when I realized that we didn’t really miss anything during the time. Sure, we missed getting out of the house, but apart from that, we still lived a really good life.

We actually ate better because we cooked all food at home (no takeaway from us and especially less fast food and bad food from shops and restaurants) and we had no misc expenses as we usually have.

This made me realize that we can indeed keep costs low and the quality of living high, which is encouraging. Sure, it’s not as low as $500 per month – but I am sure that here in the village, if we were to live full time and not have to travel that often back to the city, we could comfortably live on that low amount if no emergencies or unexpected costs happened.

We already found a lady that sells eggs for 50 bani a piece ($0.12) and another selling delicious cheese for 12 lei ($2.8) per kilo. I am sure that we will find more and more similarly advantageous offers here as we spend more time and meet more people.

We also started consuming things produced in our own yard: we’re eating delicious raspberries each day, we have a ton of plums to eat and turn into jam, we had a nice zucchini harvest and they’re still coming, we collected green peas and onions and potatoes. Eggplants and tomatoes are starting to be ready for harvesting: all of these helping us keep the costs low.

Sure, this isn’t the type of living most people would want as you lack many of the ammenities and luxuries that you have in the city. But if you are on a really low budget, considering a village house shouldn’t be excluded.

All things considered, I would say that 99% of the people coming to Romania would not be able and shouldn’t even try living on $500 per month (unless they already have food and accommodation taken care of).

The amount is just too low to cover all expenses – especially rent – and the quality of living would be sub-par.

There are many people here in Romania who are forced to live on that amount and even though they keep their heads up and manage to smile each day, it’s not a good life that they live. However, it is doable. But recommended? Definitely not.