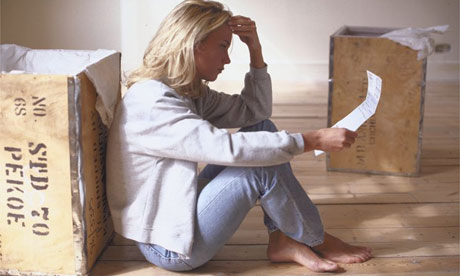 The problem with life and everything around it is that anything can change drastically in less than a second. Although I fortunately haven’t gone through losing it all, somebody very dear to me did: my father. He had it all and he lost it all. But still my family managed to make ends meet, recover and get better. Would you make it if you went bankrupt tomorrow?

Here is how things happened: it all started about 20 years ago. Communism had just fallen in Romania and my father decided to open a small shop – a very popular trend back then, where jewelry and chocolate and skirts and sports shoes were all available in a small space, usually brought in from the cheap Turkey.

Things started to go well and soon enough he was purchasing a second car, a nice house in the countryside and we had bananas and oranges daily on the table (yes, as strange as this might sound to you now, in post-communist Romania, bananas and oranges were still hard to get).

Everything ended abruptly – and unfortunately too soon: my father got scammed and lost a ton of money. Everything. I won’t go into the details on how this happened, because that’s not the point, but pretty soon my dad was faced with paying a humongous debt. In just weeks, the second car was sold, the countryside house was sold, the small apartment that he had from his family was sold and most of the debt was paid.

Just to make things even nicer, the shop that my father owned started to make less and less and ended up barely making a profit. Still, my father – who sucked at anything business related insisted in keeping it open, hoping that things will turn around. They never did.

But we were still bankrupt. I was very young back then and didn’t really get the whole picture, but I still remember not understanding why we no longer have fruits on the table. Why we no longer eat meat. Why do mommy and daddy keep fighting and why I still get to wear those ruined clothes that I’ve really grown out of… For a ten year old, the concept of money is vague and I even doubt that my parents took any time to explain the situation. But it was bad. That was crystal clear. We were poor.

Yup – just a small hole through the wall and she started selling homemade coffee. She managed to force my father close his shop which was no longer bringing any profits and again forced him help her with the coffee business – there were two people there in a 40 sq feet space, one preparing the coffee and one selling it.

My then 70 years old grandmother had two goals: shut down the black hole that was my father’s business and eventually rent the space (which happened soon afterwards bringing in some much needed money) and make enough daily from the coffee shop for us to buy bread and vegetables.

After the first day, sales had already exceeded expectations: they made the equivalent of $3 in today’s money (but back then the sum was enough to buy 10 loafs of bread). Just one week later, they were making three times more. When I got to college years later, all the money came from that coffee shop (but do have in mind that going through college in Romania is A LOT cheaper than in the US). It was my grandmother’s business idea that saved the family.

My father took over just a few years later, even though everybody loved grandma and she still had to be there to entertain the customers. Pretty soon, my mother quit her job too in order to help. Eventually, about two decades after this all happened, my actual wife took over the business after my father suddenly passed away and my grandmother got pretty ill. Early this year, the coffee shop was shut down for good because it was no longer profitable: 6 new ones were opened nearby catering for the same number of people.

Plus, my wife was about to give birth and could no longer work there. The day when we pulled the plug on the coffee shop was the day when I saw sadness in my grandmother and mother’s eyes. But we all knew that it had to be done.

What can you learn from this

When the proverbial s*** hit the fan, we were doomed. My family cracked and instead on focusing on the only thing that matters: turn things around, they started fighting and making their lives even more miserable. Here are the lessons we can all learn from this terrible experience with a happy end:

1. You can’t anticipate a breakdown. The unexpected bankruptcy came in a second and turned everything in chaos and nobody was expecting it. It was a shock.

3. You have to size down your spending. Inertia could’ve seen my family spend the same amounts per month for at least a few months. However, their instinct was to immediately cut spending and therefore have the few money left keep us alive longer. It was a matter of survival. It was the right thing to do.

4. You have to become productive ASAP. It was a year or so of living a miserable life before my grandmother decided to take matters into her own hands. Things could’ve happened sooner, but this was our case. The sooner you start doing something, the sooner you get out of the mud.

5. You have to accept help. If somebody gives you a helping hand – TAKE IT. My father was a very proud man and receiving money from an old lady probably tore apart a huge piece of his heart. But he had to do it and in the end, it was the wisest choice.

With the unstable economy today, we are always at risk of going bankrupt tomorrow. We might think that we have everything figured out, but we actually don’t. And that truth is scary.

12 thoughts on “Would You Make It if You Went Bankrupt Tomorrow?”