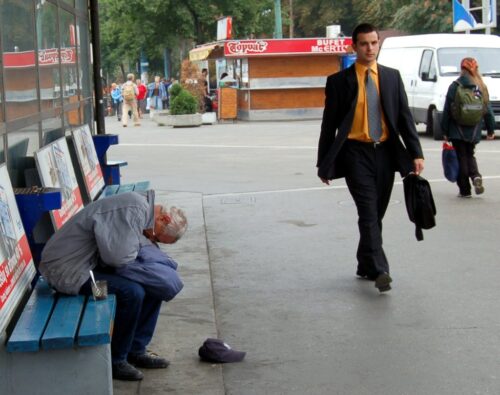 How rich are you? How poor are you? These are questions that go well hand in hand and I am sure that you probably think that you are not as rich as you really are. Because, yes, this is the truth: compared with the rest of the world, you earn more, you spend more, and you live a better life.

I hope that this article will be an eye opener for you and prove you that you are not poor. You are actually rich. At least a lot richer than you might think you are!

How much are you earning per month?

Is it somewhere around $200? I am sure it’s not and still, this is the minimum wage a ton of people here in Romania are earning in 2013. The average wage in Romania is around $475.

Come here and complain to these people that your $3,000 per month is not enough!

Or even better, go to a poor country in Africa or in Asia. I am sure that even the average wage in Romania seems like a fortune there.

Tell those people that you are so poor because you pay 12 mortgages, 15 car loans and 30 student loans. Why did you get those loans if you didn’t have the money to pay them off? Or at least the prospect of making enough money to cover for these costs?

You can’t afford anything, can you?

Here in Romania, most of the Eastern Europe and I am sure that many other poor countries, there are people who never eat at a restaurant. Did you see that? NEVER. For most, eating out once every a couple of months equals luxury. A special occasion, a moment to Instagram the crap out of that moment.

Those who eat out 4 times per MONTH are looked at with envy by others. Eat out 4 or 5 times per week? 99% of the people in Romania can’t afford that! Imagine how poor you would feel if you wouldn’t afford to eat out for a whole month! Or maybe two, and instead you would have to cook everything at home – but not everything you’d like to eat. Just basic stuff.

And maybe you’re upset with your last vacation that didn’t turn out to be as great as you wanted it to be: you were so poor that you only afforded a cheap hotel and just spent five nights there and the breakfast sucked.

My parents have not been in a vacation for over 5 years now (if not more). That means over 5 years spent in the same house, in the same city, with the same people, working and feeling miserable because they can’t afford a vacation. THIS is poor.

Upset you can’t afford all that expensive organic food?

The price of a loaf of bread in Romania is the equivalent of 50 cents. Still a lot for many people. That nice steak you buy only to throw half of it because nobody wants to eat it? People here buy PORK BONES to make soup out of it and add some flavor to the water they call a soup. And it’s not used as a base for other foods – that is their meal!

For many people here, breakfast equals a slice of bread with margarine (because butter is too expensive), with a pinch of salt for extra taste. And that probably has the nutritional value of eating rubber.

Recently, I was in a supermarket, a bit sad that I can’t afford a bottle of good wine and instead I had a cheap $3 bottle in my basket. In front of me, an old lady was trying to pay for her bag of rice (we usually pay cash here in Romania) when the cashier told her there’s no need to give him the exact sum if she doesn’t have the entire amount (which she didn’t).

The “discount” for the rice was the equivalent of $0.06. 6 cents. The old lady almost melted and couldn’t stop thanking the guy for his good deed. Because she saved 6 cents. A few more and she could afford to buy half a loaf of bread!

Go tell people who are wearing the pair of pants passed over from their Grandfather to their Father and then to them that you’re on a “shopping ban” and you will only purchase 1 item of clothing per month.

Go on and complain that you are poor!

Or maybe go to this website: Global Rich List and see where you stand compared to the rest of the world. My guess? you’re in the top 3% (although most likely you will be in the top 1% in the world).

This means that 99% of the world’s population or almost 6 BILLION people are poorer than you. And you still think that you are poor?

I know that there are many factors to consider here, such as the cost of living, but overall it’s poor choices and the lack of power to see the big picture that makes you think that you are poor.

Loans over loans, the illusion of having no money because you’re sending them to your retirement accounts (which are actually yours and a great investment to make!), spending on stupid stuff that you don’t really need, just to keep up with the Joneses… all these things make you feel poor when in reality YOU ARE NOT.

All the money that you spend on your well being are money that actually prove you are rich. Even if you manage to put aside $5 per month, you save a lot more than, probably, over 70% of the people in Romania and many, many other countries.

[PS: I might have painted a much darker situation here in Romania than it actually is. Although this is generally a poor country, people are not dying of hunger here and still, somehow, manage to make ends meet.]

34 thoughts on “You Think You Are Poor? Think Again!”