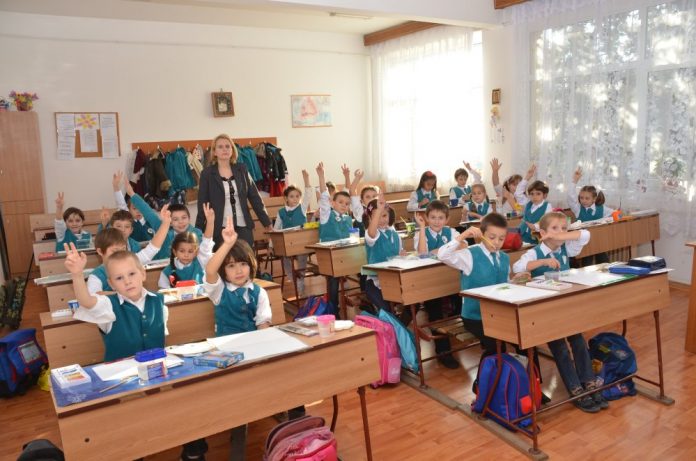 Those of you have read my previous reminiscence about Romania titled “In Romania, a German in the Hand Is Worth Two in the Bush” will already know the beginning of my story. From about 1998 to 2003, I developed an interest in Romania and visited the country many times.

After learning the language, I was often asked to act as an interpreter by various German charitable groups who were engaged in projects in Romania. During breaks in the charitable projects, we were often invited into local homes and schools for a little cultural exchange. These are some of my fondest memories and gave me many insights into Romanian life.

My first experience in a Romanian school occurred early in my visits when my Romanian was really terrible.

The whole group was invited and we were then split into pairs which then went to different classes. I believe it was a middle school, maybe what Americans would call the fifth or sixth grade. The Romanian teacher could speak English quite well. The children were encouraged to ask us questions.

My recollection of the questions asked is quite foggy, but I do remember I embarrassed myself by being overly proud of America. I proclaimed that America’s greatest strength was the diversity of its people.

“They came from all corners of the Earth to live in the USA, and their striving to make a better life for themselves made America the great country it is!” The fact that some of them came as slaves escaped me at the time… oh well, details, details…

I thought I would return the favor and ask the children some questions. As I did so, I gradually moved toward the back of the class. There, I noticed the complexions of the children were decidedly darker than the children towards the middle and front.

The German groups generally stayed for a week or two and then had to rush back to their families and jobs in Germany. As a self-employed translator from German to English and a part-time English instructor, I often had stretches where I was “between jobs” and, therefore, could stay longer.

I would strike out on my own to explore Bucharest, Brasov or Sibiu, sometimes staying for a whole month in Romania. On one of these solo trips, I wanted to visit a commune run by some Romanian college graduates who were trying to enliven a small town near Timisoara that was dying out.

I took the train they recommended which deposited me quite early in the morning at the largest town nearest my final destination. Unfortunately, the only bus to the small town where my friends lived wasn’t leaving until the early afternoon. What could I do until then?

The bus stop was right in front of a middle school and as I watched school children filing in, a lightbulb went on in my head. I would volunteer my services as a cultural ambassador to this school too!

I introduced myself to the doorman who brought me to the teachers’ room. The Principal was very excited to meet me and readily agreed to my plan. He consulted the class schedules to identify which classes might benefit. Soon I was in an English class. I was very impressed with the English ability of the children.

Although by then, my Romanian had improved quite a bit, they asked their questions in perfect English and seemed very excited to interact with a real American. The time just flew by and the class was over much too soon.

I was taken to the next class which I believe was a social studies class. Again, the children were enthusiastic in their welcome and their inquisitiveness. Even the Romanian teacher was full of questions.

Again, I probably embarrassed myself talking up the great achievements of the United States and suggesting that Romania resembled the United States in its ethnic diversity and the vibrancy of its youth. This was met with just a bit of eye-rolling from the Romanian teacher.

I remember the teacher complained bitterly about his salary of about $200 a month, and he did so right in front of the children.

I thought my work was over, but the Principal begged me to do one more class. He said it was a French language class and the French teacher was very miffed that she didn’t get a crack at me too. I couldn’t say no and was ushered into a much smaller class with maybe a dozen students.

My French ability is non-existent, so this was my chance to let my Romanian shine. Again, the time flew by. Many of the questions were the same but I am sure my answers had improved with all my practice. I came away with the feeling that Romanian children and their teachers were very desperate for contact with the outside world.

I would like to wrap up my stories with the most vivid and funny memory of a school visit in Romania. In the very small country town that was my final destination, I was very impressed with the achievements of the young Romanian college grads.

They had not only refurbished an old farmhouse and barn and planted an impressive vegetable garden, they had also started a Romanian kindergarten for the small number of very young Romanian children in this predominately Serbian-speaking village. It was a blast to play with the children, to pick potato beetles off the potato plants and just be around such energetic young people.

It made me feel decades younger! Any of them could have probably carved out a nice existence in a larger city in Romania or abroad, however, they had chosen to “take their stand” here in this small town. I visited this town and the young Romanians several times over the years. Thanks to their efforts, I always had a great time.

Oh, no! A new memory just hit me! A quick aside, and I promise I will finish my story… Many young foreigners were attracted just like me to this communal effort. Once we were lounging around, wondering what to do, when a local farmer pulled up in her horse wagon and asked whether we would like to rake some hay with her.

In a flash, we all jumped on her wagon and were soon diligently raking hay in her field. She later told us, “You know, I must be the only Romanian farmer in the whole country who has ‘guest workers’ from America, France, Sweden, Germany and Ireland!” Okay, back to my school story.

On one of these visits, one of the college grads informed me that he was now the teacher in the one room elementary school of the town. Would I be so kind as to come to his school and maybe teach the small children some English songs? There were only ten children ranging from the first grade up to the fourth grade.

The teacher, who by the way was of Roma descent, had warned me much as the first Romanian teacher many years before that I was not to expect too much from these kids: after all, they were just little country bumpkins… After the usual introductions, which were met with great hilarity by the kids and lots of scolding by the teacher, I decided I would teach them the good old English song “Old MacDonald had a farm, ee-ay, ee-ay, oh.”

Well, I was relieved that I knew this word which meant rabbit, and we restarted the song until we got to the animal sound part, “And on this farm he had a rabbit, ee-ay, ee-ay, oh! With a…” and everyone fell silent. And after a brief lull, “What sound does a rabbit make?” I foolishly asked.

Again, the little boy was quick with an answer which included a very loud SQUEAK! The rest I didn’t understand, but all the children broke out in almost uncontrollable laughter, some rolling on the floor, some to the point of tears. The teacher just sat at his desk, shaking his head in disbelief.

What’s the Best Time of the Year to Visit Romania?