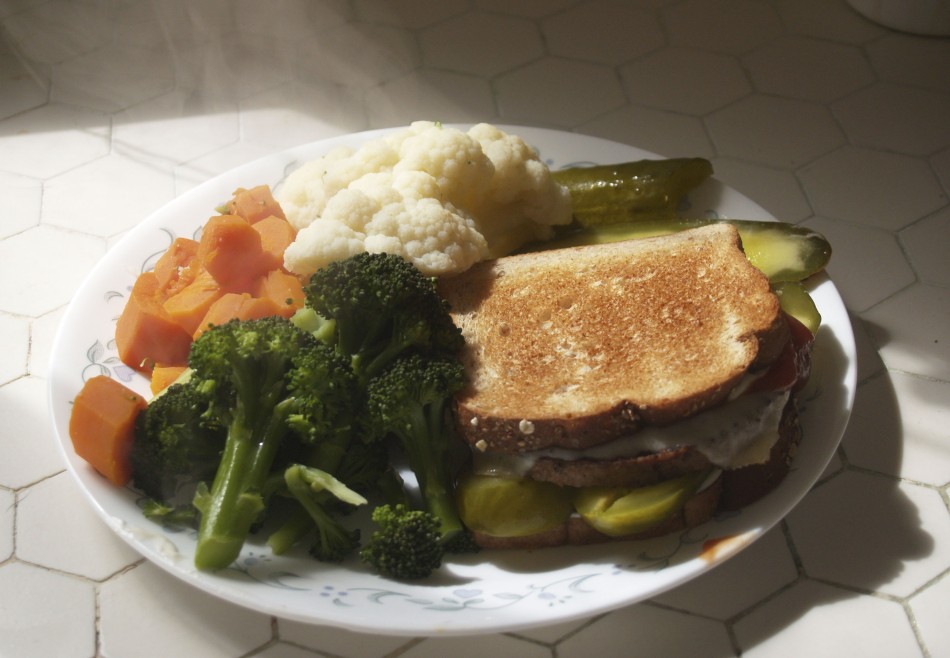 “Eating healthy is way too expensive!” How many times did you use this as an excuse not to eat healthy? I sure did it a million and five times already and the truth is that I never even bothered to check the facts: this was an universal truth, this was it and I was doomed to eat junk food for the rest of my days.

Until I finally decided not to do it anymore. No matter what the costs were, I decided that placing my own health at the top of my priorities is what I have to do (a decision greatly influenced by the fact that I have a series of health problems because, hey, nobody thinks about being healthy when they ARE healthy, right?)

So I started to eat healthy, ready to go bankrupt in a month or two. As you probably imagine already, it didn’t happen – on the contrary. I found out that eating healthy is NOT more expensive than eating “unhealthy” foods.

So what does “eat healthy” mean to me?

Probably everybody has their own definition of healthy eating and what healthy foods are. If you want to go for all organic, all imported, all sprinkled with spices from the top of mount Everest-foods, then you probably will pay a price for that and in that case eating healthy would be pretty expensive.

But if you agree with me, things change. In my case, by eating healthy (or, better said, healthier) I mean eating products that are not processed: real fruit, real milk, real meat, real vegetables.

Not the stuff we buy in supermarkets: the bread that has 4,008 ingredients when it should only have three; the cheese that has a bit over 134 when it should have just a few; the chicken soup that has 5% chicken and 95% chemicals… of course, numbers might vary but I am sure that you get the point.

Eating healthy in my case means eating REAL food, not that extremely tasty processed chemical warfare that we’re being offered in a supermarket.

How could that be cheaper than eating unhealthy?

That frozen pizza that you have? Throw it away and make your own pizza base to start with: it’s insanely easy and I guarantee that you will absolutely love the results!

Yes, it’s not organic and yes, the products that we buy are still sprinkled with some chemicals – but YOU have more control over what you eat. You select the ingredients and at least you don’t add any additional chemicals to the mix. It’s still a HUGE improvement over getting the ready-made stuff that you don’t really know how was made and what was used to prepare it.

Cooking at home most of your meals is actually a lot easier than we think it is: because we have all these products immediately available, we end up considering that preparing them ourselves is like a trip to hell and back. It’s not and it is a lot cheaper.

During the month of July, I had a budget for food of $400. We usually spend around $300 on food per month (for me and my wife, that is) so I was prepared to spend more. The results were shocking though, in a great way. After eating healthier – we haven’t managed to go all healthy since our child was born and that results in a bit of chaos – our final monthly cost was:

This means that we spent $125 less than budgeted on eating healthy and at least $25 less than what we used to spend on average as a couple. How cool is that, knowing that we also ate a lot healthier?

Here are some of the things that we did and were really impressed with how easy it was to prepare them and how insanely delicious they were:

– home made bread. We managed to eat home made bread from mixing flour with water and the whole deal, not buying that ready to bake crap, for about 20 days in July. We would bake once and the bread would be enough for the two of us for about 4 days without spoiling. Not a bad deal and it’s dirt cheap!

– whole roasted chicken: used and reused. One of the best things that we discovered this month and extremely cheap: the legs and wings would make one meal, the chicken’s breast would result in an amazing Caesar’s salad which would be the second meal, the leftovers were used by myself for some delicious chicken sandwiches or you can use the wings to prepare some delicious chicken stock. Healthy, delicious and not that time consuming to make this a big no-no.

– all sorts of salads. Since its summer and we live nearby a farmer’s market where prices are dirt cheap, we decided to take advantage of all the seasonal veggies, the delicious veggies grown locally and eat them in any form or shape.

Eating them raw in salads and steamed (those steamed baby carrots are simply delicious) resulted in us having some extremely healthy and insanely cheap meals.

And there are of course a ton more possibilities that don’t imply getting something out of a can or plastic bad, put it in the microwave and consider that eating. That’s chemical warfare for our body and as it shows, it’s even more expensive than going old school and eating healthy.

There are a couple of things that we also did in our quest to eat healthy in July (and we’re still doing it with great success in August):

– we cut the potato chips, the snacks, the crackers and everything else that comes in a bag off our diet. Not only that these are some of the unhealthiest things you can eat, but they also pack a huge caloric punch that you can easily live without.

– we stopped drinking the “natural” juices in supermarkets and instead made our own from fresh oranges, but we focused more on lemonade since it’s a lot easier to prepare. We found out that unless the label said 100% fruit, the “natural” juices were mostly added sugars.

– we stopped eating out. Although we didn’t use to eat out too often anyway, we only ate out ONCE in July. The restaurants give you tasty food, but huge portions and not always the healthiest options to put in your belly.

– we stopped eating fast food. We once craved for hamburgers and we made our own: we used real meat (chicken meat too, which makes the whole thing healthier although not as tasty) and even though we had french fries and all the rest, it was still healthier than the fast food option although in this particular case, not cheaper.

So all in all, because I’m dragging this for too long, the idea is pretty simple: eating healthy, after testing it out for nearly two months, is cheaper than eating unhealthy foods! And not only that this revelation alone is exciting, but we also feel better as a whole!

So if you at least consider switching to a healthy lifestyle, go ahead and do it – at least give it try. There are some obstacles to pass – out of which cooking your own meals is probably the biggest – but it’s really worth it!