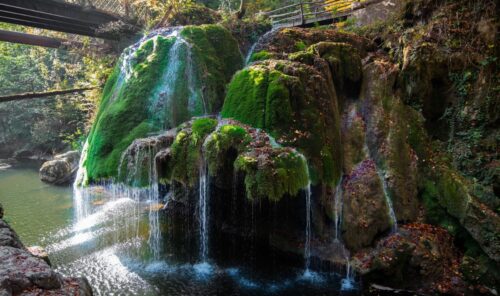 I was happy to visit the Bigar waterfall with my family a few years ago. After sharing with you in a recent article the beauty of Vanturatoarea waterfall near Baile Herculane, it’s time to check out the new and more famous one.

June 2021 UPDATE: The Bigar waterfall is gone. Or mostly gone as it collapsed.

I woke up to read the shocking news and rushed to report it. I’m still under shock to see that the beautiful waterfall you can see in the photo above (and more photos below) now looks like this:

As you can see, most of the waterfall broke and crumbled into the water. The authorities say that it was a natural process, with the waterfall collapsing under its own weight, which kept increasing over the years.

So one of the most iconic waterfalls in the world is no more. Adjust your travel plans if you wanted to see it and no longer do. It’s heartbreaking and I really can’t find my words now.

The funny thing about the Bigar waterfall is that it’s located in Caras Severin, just a bit over an hour away from my home.

Yet, until it rose to fame thanks to the internet, I had never heard of it. But since it was so close, we decided to visit it – after all, there were so many people coming to see it from much, much farther away.

16 thoughts on “Visiting the Bigar Waterfall in Romania (2021 Update: It COLLAPSED!)”