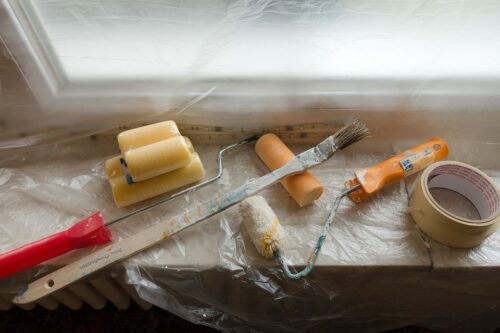 In late June, we have decided to purchase our own apartment here in Romania. It was an old two bedroom apartment that hasn’t been renovated since its initial purchase back in 1977… so we knew that there was a lot of work to be done.

And today I am here to share with you the costs for renovating an apartment in Romania, as well as the results of the work Romanians on a budget can do.

Please note: This article was originally written back in 2014, when we actually bought our apartment. However, it was updated in 2020 with new mentions, notes and prices to better reflect the current state of the property market in Romania.

The updated prices were possible thanks to a friend of mine who recently purchased an apartment and had it renovated as well and shared the costs with me.

Back in 2014, we purchased the apartment you can see in the original article here, with the photos showing the 1977 apartment in its entire glory. Back then, it only cost 25,000 Euros ($33,850) as we were lucky enough to buy after the recession that affected the world and the housing market was at its lowest.

Even back then, with the price being so low, for us it was a huge expense that saw us spend all our savings and even get a bit of a debt to afford the purchase and the remodeling. And we were lucky enough to afford it thanks to one very successful blog that I managed to build and sell back then.

The entire purchase/remodel thing took us just a couple of months (after finding the deal on OLX, which is recommended in my article about renting in Romania).

We basically had to replace and repaint everything everywhere, including the electrical wiring, doors and windows, water pipes… everything.

And although we did hire a team to do this – as it was clearly a job for somebody with a lot of experience and man power compared to me – it still proved to be extremely tiresome and fund drenching.

The result? The costs for renovating and apartment in Romania were higher than we had anticipated at first, and you can check them out below for our 2014 project. Please red on afterwards, to see some updated prices and how much they have grown in the mean time.

We were initially anticipating extra costs of just $6,600 / 5,000 Euros, so having to put an extra $2,300 / 1,715 Euros on the table didn’t feel good at all, especially since we still had a lot of other purchases to make, including most of the furniture.

But I personally can sleep on a blanket on the floor for now and I wouldn’t mind! I’m at home and it feels great to own your little place in the world, no matter how cheap the country you live in is.

What matters the most is that we have our own place and we’ll soon turn it into our home. There’s no hurry, now that the basics were done – and that was the most difficult step.

Do have in mind that when it came to renovating our Romanian apartment, we were on a pretty tight budget. This means that we didn’t go for the most expensive things available, meaning in turn that we’re not talking about top quality stuff here.

The electrical part was top notch since you don’t play with this, but otherwise everything was in the medium-low range price-wise.

Despite that, I can say that everything did last well and apart from the kitchen furniture that lost a few doors and needed some maintenance over the years, everything else is still in shape and looking good. So even if the products we bought weren’t the best on the market – it mostly was all design-related and not necessarily of low actual quality.

I didn’t take any high quality photos of the apartment after it was finished, but my wife did some nice before/after shots on her mobile phone and even though the quality of the images is pretty poor (and the place is still pretty dusty), it shows the huge improvement our apartment has seen over the two months months. And I promise it looks even better in reality!

So here are the before and after shots of the apartment renovation here in Romania:

How much would it cost to renovate an apartment today?

Unfortunately – for those looking to buy now – the amounts we spent are nothing but a sweet dream today. While costs in smaller cities like ours are still lower than the ones in the larger cities, you should still expect to pay more for a complete remodel like we did.

Thanks to the data I received from a friend who has recently gone through a similar ordeal, the costs this year would be as listed below (please note that he did the remodeling in a larger city, Timisoara):

While this is not really an apples to apples comparison, it’s pretty obvious that the prices now are much higher than they used to be. My friend also didn’t go for over the top products, but not the cheapest either.

Still, in the expenses above, he did not change any electrical wiring or pipes (his building was newer and there was no need for that). Also, equipping the bathroom is not included in those costs.

In my case, there was no kitchen equipment included (oven, stove and so on – which can easily add up to 1,000 – 1,500 euros alone), nor we had any furniture included.

But I would still consider my friend’s expenses closer to the reality today – especially when it comes to the costs of the team and the materials for the renovation. Everything else depends on your taste and budget.

Also, the apartments themselves are much more expensive nowadays and even in my city, for 25,000 Euros – the amount we paid for our two bedroom – is now considered a good price for a one-bedroom. Although even those sell for around 30k to 35k thousand.

In other words, prices have exploded here in Romania and are at an all time high right now. There are voices claiming that a major bubble burst is coming – but these voices have been around since 2018 and the prices still went up since then. So you never know what’s going to happen.

My advice in this case? Buy and start your renovation project if you have the money now – you can never guess how the market will be one month or one year from now.