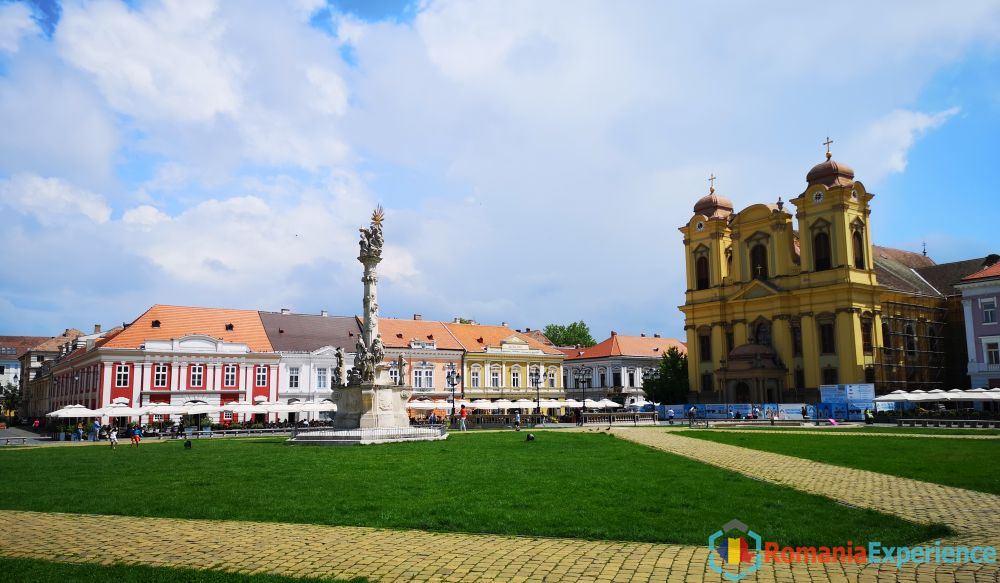 Today, we’re going to talk about Timisoara, Romania, which is a great city to live in. I haven’t chosen this city randomly – in 2023, Timisoara is the European City of Culture. So we’re already getting a nice start.

And even though this might not sound like a very big thing, it actually is mainly because a lot of money was pumped into the development of the city for 2023. There’s a lot of exciting stuff still happening in Timisoara, and I am sure this will continue after 2023 as well.

In case you didn’t know, another Romanian city was the European Capital of Culture in the past.

It’s the case of Sibiu and judging from the fact that it’s now one of the most popular and best known cities/destinations in Romania, while it was virtually unknown to the world before 2007, there’s a lot of excitement surrounding Timisoara for the same reasons.

Timisoara is already one of the biggest cities in Romania, an important university hub in the country and a popular destination for both people living in smaller cities and expats.

Timisoara is definitely on the rise right now and has the potential of becoming a really hot spot in Romania, especially since its location in the country is a bit better than Sibiu’s, at least in terms of easy connections to other major cities via roads/highways or airports.

This is the city where the Revolution against Ceausescu’s communist regime started in December 1989 and it was the first city in Romania to be declared “communist free”.

The buildings in the historical center still have bullet holes from the shots fired during the revolution, and that’s a mighty impressive thing to see – even though it brings some chills up your spine as well.

You can check out the best things to do in the Timisoara once you’re done reading this article.

As you can see in the photo above, the Bega river runs through the city, with beautiful (and currently renovated) parks and bike roads built around it.

If you’re nature fan or you love to cycle or jog, there are tons of opportunities on the banks of the Bega river – as well as a huge playground for kids or restaurants and cafes with nice views over the river itself.

As a result, the real estate market is very hot right now – as it is in most Romania – with prices increasing a lot, but also with tons of developments, some of which extremely impressive and unique in Romania (but more on that a bit later). Here are the best neighborhoods to live in Timisoara.

Cost of living in Timisoara

The cost of living in Timisoara is low, despite the fact that it is a large city. Thanks to the many students here, you can live a decent life on a budget. I estimate that around €1,000 per person would be a decent amount each month.

Of course, if you have a higher budget, you have a lot of options for more luxurious places to visit or live in.

In other words, this city is great for any type of budget and has enough offers to satisfy even the most advanced demands, as well as more modest ones.

But at least the ticket prices are really low: 4 lei / €0.80 for 60 minutes (unlimited trips) or 130 lei / €26.30 for unlimited travel for one month. You can check out updated numbers of the public transportation prices on the RATT website.

If you’re driving in Timisoara, you will be pleased to know that traffic is not as crazy as it is in Bucharest, but you’re still in Romania so expect some reckless driving, a lot of honking and pushing the limits of the cars to the maximum.

On a more personal note, I can say that I wasn’t a very big fan of the city until recently.

I had this image about Timisoara being dirty and forgotten in time, with buildings looking like ruins, with streets that needed a lot of work done, with few quality entertainment options available.

It is also one of the cities in Romania where bicycle riding is encouraged and you will see a lot of areas for riding the bike and many people actually doing it.

There’s even a special bike track all the way to Serbia that has been built recently, allowing people who love riding their bikes visit Romania’s neighbors on one.

Iulius Town has been inaugurated in Timisoara recently, at the end of a few hundred million dollars that have been invested into this project.

And I must say that it is absolutely amazing – the kind of stuff you don’t consider possible in Romania, but which is starting to happen more and more often now.

This is the kind of stuff that I really like to see and definitely an amazing option for those considering a move to Timisoara.

Timisoara has evolved quite a bit in the past few years and I am sure things will look even better now that it is European Capital of Culture in 2023.

International schools are being opened and the city is booming. It even managed to impress me a lot: I really used to dislike it in the past, but after spending about two weeks there this summer, things changed completely and now I can say that I really love the city.

And even though the answer was until recently “Definitely NO!” from now on, my answer to this question is “For sure!”

I really loved Timisoara, I loved to see how much it has grown in these past few years and I loved to see all that construction work taking place, knowing that all those projects – be them for new buildings or renovation projects – will make the city glow even more in the future.

Timisoara is also less chaotic than Bucharest, but still a very large city to offer most of the goodies that Romania’s capital can offer.

Despite this, it also seems to be very walkable – at least in its central areas and surrounding zones, which is always a bonus in my books: who wants to waste their life in cars, getting from point A to point B?