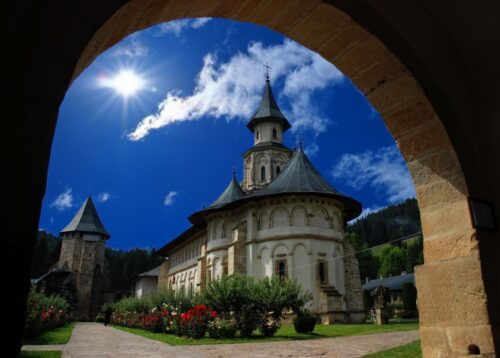 Romania is well known for the beauty of its monasteries, especially in the North Eastern area, known as Moldova (Moldavia) and Bucovina. But with so many too choose from, you might be wondering which are the best monasteries to see in Romania.

I am here to help you with that answer, by sharing the top 8 monasteries here. They are absolutely beautiful, have an amazing history and I am sure you’ll love visiting them.

Dating from medieval times and being unique in the world, the Romanian monasteries must be placed on your “to see” list if you get the chance to spend some time in this country.

I strongly recommend taking one of the tours below to check out the main monasteries in the country:

If you’re more of the DIY person or you want to include more of these beautiful, historical buildings in your itinerary, I’ve got you covered: I’m listing below the most beautiful Romanian monasteries to visit.

Initially, I wanted to group them into areas based on their geographical location (and therefore make it a lot easier for somebody who spends just a few days to choose a group and visit), but in the end I decided to show you just the best of the best. Maybe spend a few more days in the country to see them all, right?

Now let’s see the best monasteries to visit in Romania below!

This is probably the most famous monastery in the country. So if you can only see one… then this should be it!

Known as the Sistine Chapel of the East, Voronet has a unique shade of blue known as “Voronet Blue”. It was built in 1488 by Moldavia’s ruler back then, Stefan cel Mare (Stefan the Great) in a record time: less than four months!

Despite the record-breaking build times, it is stunning! Situated 36 kilometers away from Suceava, this is THE monastery you have to visit if you only have to pick one, mainly because of the unique shade of blue and all that beautiful art that takes you back in time.

We’ll remain in the area for now, with a monastery that has a nice legend regarding its construction: it is said that, in order to have her sins forgiven, a woman brought, over a period of 30 years, all the stone required to build it. Now that’s dedication – as well as a really long waiting time!

Actually built in 1582 by two nobleman families in Moldavia, this a a Gothic – Byzantine creation that offers quite some eye candy and, as you can see in the second photo, a bit of protection from invaders.

Back then, things were not as simple as they are today and many of these monasteries were created to serve a double purpose and protect the weak (or just the nobility) if need be.

The monastery is located near the Sucevita village, very close to the Suceava city in North-Eastern Romania.

This one served as an incredible source of culture and education in the past, being the place where the first study books in Tara Romaneasca (currently Oltenia region) were written.

It was built by Mircea cel Batran, one of the greatest rulers of Tara Romaneasca – and it is the place where he was buried.

It also acted as a fortress during the Ottoman invasions: its location seems to have been chosen from a tactical standpoint as well, with the Olt river protecting one of its sides.

For a short while, in the 1800s, it was turned into a prison, but the authorities realized how stupid that was and it was offered to the monks once more and fortunately remained a monastery ever since.

The Cozia Monastery is one of Oltenia’s best known, with the largest nearby city being Ramnicu Valcea.

It also has a lot of nice things to see around it, from the Caciulata / Calimanesti villages, to the thermal baths in Baile Olanesti (the Olanesti baths) or the Cozia National Park itself.

Named the “Jerusalem of the Romanian nation” by Romanian poet Mihai Eminescu, Putna was built between 1466 and 1469 and it the resting place of great ruler Stefan cel Mare (Stefan the Great).

It is also the house of an impressive religious museum, with unique manuscripts and items from the medieval times.

I must admit that I am a bit subjective when it comes to placing this relatively young (built in 1936) monastery on the list – it’s really close to my home city, located in a nice town near the Danube, Orsova.

But even though it’s on the lesser known side, it is really beautiful, with some spectacular views over the Danube.

It has a beautiful story, too: it was built by journalist and political activist Pamfil Seicaru, who survived an explosion in that area during the first World War – and promised to build a monastery as a “thank you” and in order for us all to remember those fallen during the war.

However, the church back then didn’t want to accept it as a monastery since it was not built on “holy ground” and soon afterwards the communists turned it into… a restaurant and disco.

It didn’t help that Seicaru and Romania’s then dictator Nicolae Ceausescu didn’t meet eye to eye.

It was only in the 1990s, after Ceausescu’s fall, that the monastery was accepted by the church and ever since has been an all-nuns monastery. A beautiful one, too with no parties allowed.

And if you’re in the area, make sure not to miss the Decebal rock sculpture nearby: it’s equally impressive (if not more so!)

This tiny and apparently unimpressive monastery (at least if you look at it from a distance) has become one of great significance to Romanians in recent times, as that’s the place where priest Aresnie Boca is buried.

He is one of Romania’s biggest religious figures of recent times, with some voices demanding for him to be sanctified.

Even though the Church hasn’t done it yet, thousands of pilgrims go to the Prislop Monastery to visit his grave, hoping that he can perform some miracles for them from behind the grave.

Since we live in a consumerist era, you can now buy fridge magnets featuring Arsenie Boca’s portrait, as well as all sorts of souvenirs and items related to him.

Like most things nowadays, the image of a man who actually believed in something and helped people during tough times, is turned into a “made for profit” thing.

The Prislop Monastery is located near the Silvasu de Sus village, close to Hunedoara and Deva.

One of the most famous churches in the Maramures region, this is also Romania’s most famous – and probably best preserved – wooden monasteries that still stands.

It was built back in the 18th century and, at that time, it was the tallest wooden structure in Europe, standing proud at 57 meters tall. It is now an UNESCO heritage site and a real joy to visit.

The monastery itself is a bit away from the main roads, with the closest relatively big city being Sighetu Marmatiei, located some 24 kilometers away, with Baia Mare being around 66 kilometers from it.

We’re rounding up the list with another monastery that can be found in the Moldavia region, this time close to Piatra Neamt, near the Nemtisor village.

It was built back in the 15th century during Stefan the Great’s reign. He was the Romanian leader that built the highest number of monasteries during his rule – 19 of them still standing today.

The legend has it that he built a church or monastery after each fight he won, in order to show his grace to the lord.

Back to the Neamt Monastery, it was an important place for education during those times, with many of the most important books of the time being written there.

The art itself is representative for the medieval times in the region – although for me the simple fact that it’s still standing after all this years in impressive enough.

Moldova has the most beautiful monasteries in the country – and definitely the most to offer – but scattered monasteries throughout other regions can provide you with great value thanks to their minimalism, legend and especially natural setting.

I remember visiting, when I was a child, a monastery where the monks were sleeping in small cave-like structures dug in the mountains, with nothing but a bed and stand for candles – the perfect place for meditation…

I know that has marked me for years and I still remember the inspiring minimalism that they were encouraging, even before it was a thing.

I unfortunately don’t remember the name of that monastery, but all of them have impressive features like the one mentioned above.

So, no matter what your personal believes are, the Romanian monasteries can provide great value in terms of Romanian history and eye candy.

Plus, most of these monasteries actually allow people to sleep over for a night (or more) and some of them don’t really ask for a fee if you decide to stay, but donations are obviously welcome.

Just ask one of the monks or nuns there if it’s possible to spend some time there if you want to. You can even serve lunch with them, in some cases, which is an interesting experience too!

1 thought on “Best Monasteries in Romania: Most Beautiful Ones that You Must Visit”