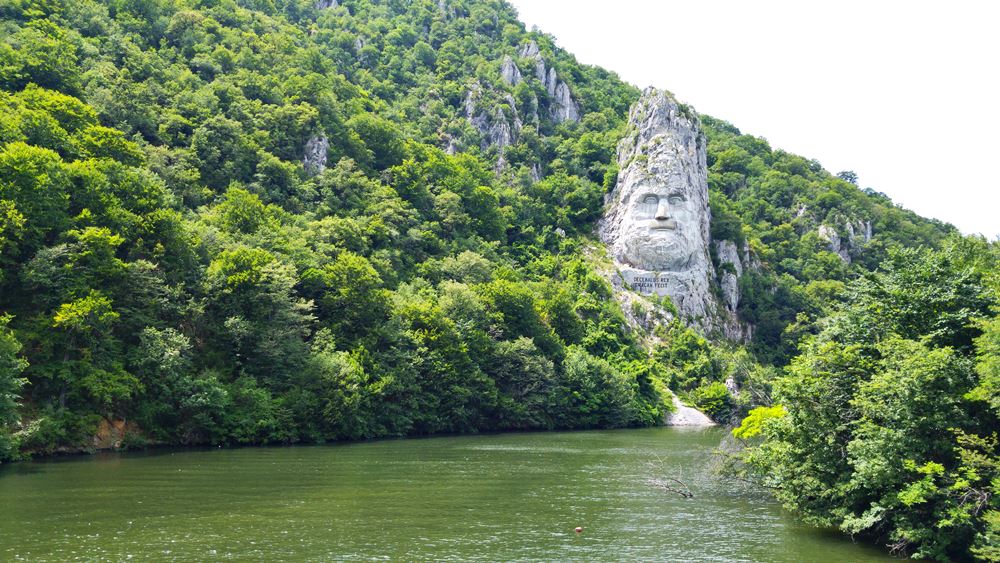 One of the main attractions on the Danube river in the south-western part of Romania – if not THE attraction – is the rock sculpture of Decebalus near the city of Orsova.

The humongous carving is 42.9 meters-tall (141 ft) and represents the face of Decebalus, the last king of the Dacians, the ancestors of the Romanians.

Also known as Decebal’s Statue or simply “Decebal’s head” in Romania, this huge rock sculpture is situated some 25 kilometers away from Orsova, in the Mraconia river valley. Check it out below:

It appears that Romanians love big things – see The Palace of the Parliament or the People’s Salvation Cathedral for other mammoth structures here. The Rock Sculpture of Decebal is the largest sculpture on a river bank in the world.

Where is the statue of king Decebalus?

Getting to see this rock sculpture is not extremely easy if you don’t own a car since there are no direct buses or trains going there.

From the nearby cities of Orsova, Baile Herculane or even Drobeta Turnu Severin (and probably even places that are father away from the rock sculpture of Decebalus) you can find companies that offer tours to the area – which are a good choice, especially since they also include other must see attractions nearby, like a cruise on the Danube.

If you want to get there yourself, you can check out the exact location of the Decebal statue marked here on Google Maps.

This impressive rock sculpture is actually the tallest rock relief in Europe and can be seen from the Danube itself and even all the way over from Serbia if you happen to pass by.

But, of course, nothing beats getting up close and personal: there are boat tours that take you to the base of the huge sculpture or you can see it from a nearby bridge. We took the second option, and it’s still pretty impressive as you can see below:

When was the statue of Decebalus made?

This rock statue of Decebal was built between 1994 to 2004 by Romanian businessman Constantin Dragan. 12 sculptors worked for 10 years to build this impressive sculpture.

While many people seeing it for the first time believe that it’s some sort of amazing, antique work of art of the Dacians, it is unfortunately not. But this doesn’t make it less impressive, since it still is the larges in the world.

It’s funny that the person who commissioned it wanted to make sure that everybody knew that it was him who paid for it.

He had the following inscription in Latin carved at the base of the sculpture: “Decebalus Rex – Dragan Fecit” (which translates to “The King Decebalus – Made by Dragan”.

More things to know about Decebal’s statue in Romania

An interesting thing about the statue is that it has never been completed: what we can see today is just 70% of the original plan, but for some reason work on it hasn’t continued since 2004. But even so it looks really nice and impressive.

Within walking distance, there is also the Mraconia Monastery – a very small church that’s pretty unimpressive actually, but worth getting into since you’re already there, especially because there’s really nothing else to do (unless you decide to hop on a boat to see the Cazanele Mici and other attractions on the Danube).

I was actually extremely surprised – and not a pleasant surprise that was – when we tried to find something to eat there.

We rode the car to the nearby Mraconia, which should be considered a sort of a resort on the valley, but there were no restaurants in the area. The road itself was horrible – a dirt road full of holes and no actual signs.

There are several pensions and villas that you can rent there, but they all seem to be self-catered. Anyway, they were all closed when we visited so we can’t know for sure.

All but one. When we entered, we found ourselves in the middle of a big party organized by a large group. Somebody quickly came and told us that they had rented the villa.

They didn’t offer any of the goodies they were barbecuing either, which was a shame. (Just joking, of course!)

We saw on the other side of Mraconia a place that seemed to be open for business and with some tables outside and tried to get there.

But we had to cross some roads in a forest with no indicators whatsoever. We roamed around a bit and always ended up on a dead end, so we eventually decided it was too much of a hussle.

So we took a final look at the impressive statue of Decebal and headed over to Orsova, where we were sure we could find something good to eat.

It was really disappointing to see this Romanian way of dealing with one of the most popular attractions in the country and the fact that there was absolutely no place to grab something to eat nearby (unless you consider 25 kilometers away nearby).

When we got there, we saw dozens of cars and tens of people – coming and going – and I am sure we were not the only ones who wanted to eat. An incredible missed opportunity here to generate some extra cash!

But all in all, missing food-aside, it was a really good experience and seeing that huge, impressive statue is truly worth it.

If you don’t have a car to get there, I would really recommend to include it in a tour of the area – most likely leaving from Orsova by boat since there are even more goodies to see along the Danube side.

I also know that if you visit Baile Herculane (some 20 kms away from Orsova), you can book tours to the statue and other local attractions from there and prices are always affordable.

Because, as impressive as this statue is, you can’t really spend more than a maximum of 30 minutes staring at it and the beautiful surroundings.

But if you do get the chance to be in the area, do so for sure. The nearby Dubova village is also growing a lot lately as an impressive touristic attraction, with many hotels and pensions and villas opening up for business and offering some amazing deals: great views, great accommodation and a great time overall near the Danube.

That’s where you would most likely find something to eat as well – but we didn’t want to risk anymore, especially since I was already a bit upset following my trip through the woods and the dirt roads there.

8 thoughts on “Visiting Decebal’s Statue near Orsova: Everything You Need to Know”