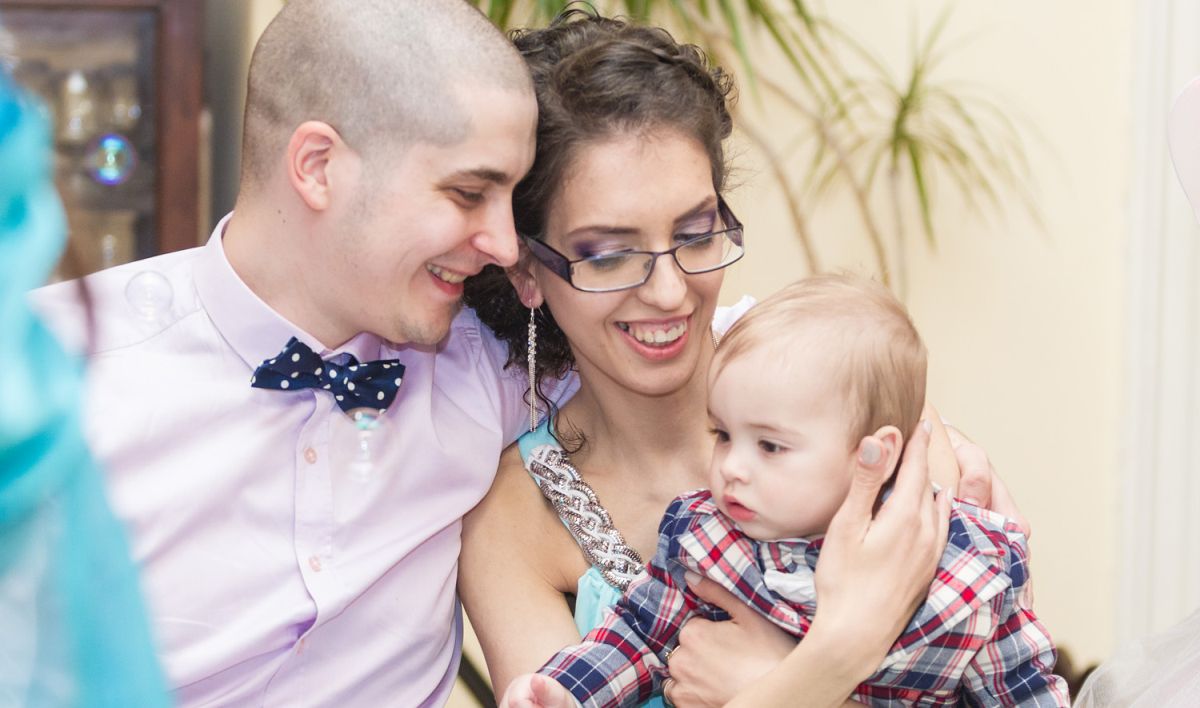 A baby’s baptism (or christening) in Romania is really big thing. One of those really important events in a family’s life, which can be compared in terms of importance to the wedding.

This means that the baby’s baptism can turn into a humongous party with hundreds of guests, a party that lasts all night long and is made to impress. Usually, parents spend on organizing this party almost just as much as they spend for their wedding.

We had our baby’s baptism here in Romania some years ago, but in the light of a pretty tragic event that happened recently during a baby’s baptism (where the baby was submerged in the water for the procedure and died), I decided to update this article as well.

Fortunately, this event didn’t go unnoticed and many big voices of the Romanian church recommended that babies should no longer be submerged when baptized.

Despite these outdated practices – which are pretty dangerous as that horrible event proved – a Christening party usually goes really well and is a very fun event to be part of.

And that is what we’re going to talk about today: everything you need to know about the Romanian orthodox baptism – traditions, gifts you should bring and what to expect from this huge celebration.

Our experience with baptism in Romania

We have first hand experience with everything, since we had to baptize our son back in 2014. Not a lot has changed since, so our experience and this updated article will tell you everything you need to know about it.

First of all, it’s the parents (mostly) and the baby’s godparents that have to do a lot of preparing before the big day.

You have to book your date with the Church and make sure that you bring them all the things they need (candles, clothes for the baby and different other things – the priests will tell you all), but also make arrangements at the restaurant for the party that follows (menu, decorations, music and other things).

It was pretty stressful, I have to say, especially because we’re not very familiar with all the traditions (and everybody seems to think that you “must” this or that, many being just outdated Romanian superstitions) but in the end, all went well and we had a memorable, fun day.

Since an image is better than 1,000 words, I am here to share a few with you outlining the most important steps during the baby’s Christening in Romania (all the photos below are from our son’s baptism day).

For most of the ceremony that takes place at the Church (this is how you start the day), the Godparents hold the baby.

In the church, all the things on the table you can see in the photo below are used during the christening: there’s a bottle of chrism – a bit of which goes on the baby’s head, there is some holy oil that they put in the water used for the Christening, the small scissors are used to cut a bit of hair (which the parents will hold onto forever) and the golden crosses and Bible are there to be kissed by the Godfathers at different moments during the ceremony – so you’d better hope nobody has the cold (or worse!)

You can also notice in the background (will be a better image below) the special candle – it has to be held by the Godfather and generally it is decorated specifically for moment – we went for a cutesy little flower teddy bear that we liked so much!

After the priests read their part from the Bible, the baby is placed into the holy water and the baptism is complete.

Normally, the baby is supposed to be completely sank in the water – three times in a row, too – while the priest holds their nose so that they don’t breathe in the water.

This is pretty barbaric and shocking for the babies and as a result, more and more priests just put some water on the baby’s head, symbolically.

Probably now, after the accident, even more will do so. Parents can also ask the priest(s) not to submerge the baby.

After the “bath” the baby is changed into a new set of clothes (the tradition has it that these have to be bought by the Godparents) and he’s allowed to play with anything, as long as he remains happy:

After the Christening ceremony is over, everybody heads to the restaurant for the party – usually straight from the Church, but there might be a delay in some cases if the procession is too early.

In many cases, the party will actually start later in the evening and last all night. We started early in the afternoon and the entire party ended before midnight.

So it’s not set in stone when the actual party is going to start – the parents are the ones who decide. But usually, it’s considered more important for friends and family to be at the party itself than the church ceremony.

(This is basically because a gift is expected from guests, and the gift is offered at the restaurant, toward the end of the party).

At the restaurant, you are expected to have themed decorations and basically everything you’d get from a wedding. We even got some cutesy personalized paper napkins:

Just as it happens with the weddings, the party is started by the first dance where the parents and the baby have the scene.

However, since you can’t really do much choreography with an infant (there are people who baptize their babies when they’re 2 months old) , the three will only dance alone for several seconds before being joined by the others and the party officially begins.

Later on, usually at midnight (but we opted for a day party, so they came at 7 PM, ha!) there is a special moment when fairies visit the baby to wish him well for a great destiny.

In Romanian, these fairies are called “Ursitoare” and the word basically means “the girls who decide fate”.

And after three or four courses, plus cake, plus a lot of alcohol, the day is over. Not before you party like the rock star you are!

We went for a more modern approach to the whole thing and got a DJ for the music, but it’s still very common to bring a traditional Romanian band or singer who will perform traditional Romanian music (duuuh!) while the guests dance the “hora” – a traditional dance with complicated steps and many variations, something that I never managed to master.

To be honest, I am not really fond of the traditional Romanian music either and dancing the hora is boring in my opinion (basically, you hold hands with other guests and move in a circle for several minutes”) but it’s still extremely popular, even with the younger generation who, for some reason, love it.

Plus, you can always have the controversial manele at most parties in Romania, including Baptism parties. These are usually catchy and melodic – and it’s even better for foreigners who can’t understand the lyrics (which are, in most cases, moronic).

Do You Have to Bring Gifts at the Baby’s Baptism Party?

Yes, it is usually expected from all guests to offer a gift at the end of the day (when the Christening party ends). Usually, guests put some money in an envelope that is given to the parents.

In the end, the Christening of a baby is an extremely important event in Romania and the second biggest party in one’s life (after the wedding).

The biggest question people ask is “how much money to give?” but the truth is that there’s no exact answer here.

Normally, you are expected to pay at least the amount that would cover for your restaurant bill, as well as your part for the music, church, decorations and everything else.

Then try to add a bit of extra for the parents to get a profit. Now, actually knowing how much these cost is the tricky part because the organizers don’t make this information public in most cases.

So if you can afford it and want to, you might want to play it safe and start from 100 Euros per person.

I would say that unless you really know the costs were higher or you want to offer a really nice amount of money to the family, something around 100 Euros should be more than enough for most Christening parties.

Remember: you are not expected to sell an arm and a leg to offer a monetary gift, so just offer as much as you feel is fair (or you can afford) and enjoy the party.

This used to be extremely “profitable” back in the day, with people buying cars or even apartments with the money made after the event (or at least a new kitchen or a fancy vacation).

Today, though, the money generally only covers the expenses for everything and it all evens up in the end, even if some offer less – because there are some who will always want to shine and offer more.

Have in mind that only the parents will know how much you’ve given them (since you usually put the money in an envelope), and if you don’t want to sign it, you can offer it as an anonymous gift.

But everybody signs theirs, so you’d still be identified if the parents really want that.

Can you bring a regular gift instead of money?

While this is not common, it is becoming more and more popular in Romania.

At the moment, there aren’t lists of items needed by the family that you can choose from, but if you want to offer a gift instead of money, you can definitely do so.

But try to make sure that the thing you offer is actually useful, especially if it’s a bit more expensive. No need to give them a brand new microwave oven, if they already have one which works fine (better give them the money instead, so they can get whatever they actually need).

In the end, in our case, what mattered the most was to have fun during our son’s Christening party and that we did.

We were not expecting the people to give us any money (although all of them did because that’s how things around here go), but we were grateful that we didn’t have to pay by ourselves for feeding and entertaining the crowd for one entire day.

If you have additional questions about baptism in Romania, let me know in the comments section below!