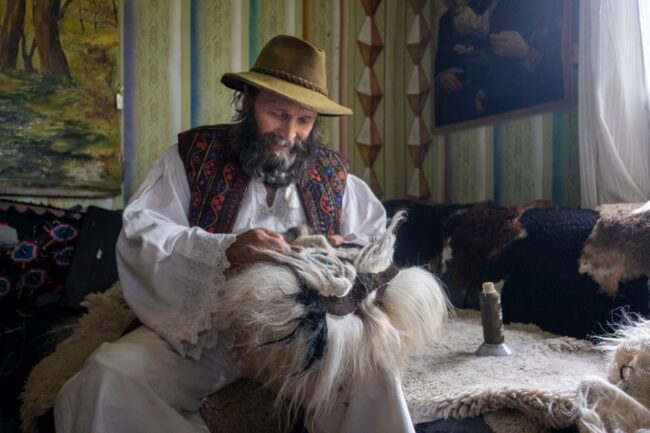 Traditions… They have been part of village life for centuries and have an archaic sound in their name that makes us think of them as living customs once- but today only memories.

And yet… Some of these popular Romanian traditions are still alive today, despite the leveling assault of contemporary civilization. Modernization is felt, like everywhere in the world, but traditions endure in Romania.

Today I want to talk about some Romanian traditions, ranging from pretty strange ones (probably these are the most fun to know about) to various other traditions you might experience when you visit the country.

The big and small events of life, work and marriage, religious beliefs, Christian or pre-Christian, give meaning to these popular Romanian customs, which still persist here, as a reassuring message of continuity and stability.

So, let’s not waste any time and instead let’s check out the Romanian Traditions you should know about: the ones that still exist today.

I will start with these, as I consider them the most fun to know about. These strange Romanian traditions sometimes intertwine with the superstitions I already wrote about… but they still have to be mentioned.

Romanians generally admit that they like to believe in all kinds of legends, and even feel a sense of comfort when they follow the unwritten laws of superstition.

From old beliefs that make no sense (to most people at least) to more recent ones like reading the horoscope regularly and guessing one’s future in a cup of coffee… everything is possible here.

The giving of the hen

For example, a pagan custom strictly observed in Romanian villages is the giving of the hen or rooster over the pit. This is usually given to a gravedigger and the purpose of doing this is to drive evil spirits away.

Among the first things Romanians do when someone dear to them dies is cover all the mirrors in the house with cloth.

In popular tradition, it is said that the soul of the deceased will remain stuck in the uncovered mirror otherwise.

Moreover, the superstitious are convinced that those who look in the mirror in the deceased person’s house will be the next to perish.

They also leave a glass of water for the deceased to “drink” from and many will still try to convince you that the one who passed really drinks from that water because it’s less and less every day (don’t try to explain physics to them!).

Also, continuing with this macabre topic, it’s worth noting that in most cases, the first night after a person dies is followed by a “priveghi”.

The family and friends of the deceased spend the entire night awake, in the vicinity of the deceased (which was, until very recently, almost always kept at home for a few days), telling tales and memories about the one who passed away.

Other strange traditions in Romania

You can’t talk about Romania and not mention vampires or strigoi. While the former were actually turned into a “Romanian thing” by the media, the Strigoi are as “real as it gets”.

Therefore, once per year, when it’s known that they start roaming the streets, people start hanging garlic next to the doors to scare them away. Apparently, the bad smell puts them on the run. And no, they can’t use windows to get inside! Ha!

There are various Christmas traditions and rituals in Romania that have been passed down from generation to generation and have been enriched from year to year.

Every year, the little children, like in other nations, wait for old Santa Claus, who arrives with a quiver full of gifts for good children, and the tree is decked with decorations a few days before Christmas.

Back in the communist days, Santa’s Claus name was changed from Mos Craciun (translated as Old Man Christmas) to Mos Gerila (Old Man Frost) because the communists simply wanted to erase the idea of the Birth of Christ from the popular culture.

Caroling is one of the most treasured Christmas tradition. On the first day of Christmas, carolers walk from house to house with a star in their hand, announcing the birth of Jesus to the people with songs and poems.

It is stated that whoever does not open the door to carolers will have an unsuccessful year and bad luck in the house as a result of his stinginess. Now that’s a good way to convince people to open the door (and then reward the singers with money or other goods and goodies).

In the Maramureș area, adults also go caroling, not only children. They are received by the hosts and treated with cakes, sausages, pork dishes and traditional alcohol like Tuica.

Also on December 25, people send Christmas wishes and messages to their loved ones, to whom they convey their good thoughts.

Mistletoe above the door

Another common tradition is to hang a sprig of mistletoe above the door frame. Mistletoe appears in many cultures, and its origin is unknown.

According to Christian-Orthodox custom, the person who places mistletoe in the house will have a prosperous year, happiness, and harmony in the family.

Also, during the New Year’s celebration, if two people happen to be under the mistletoe at the same time (which can be moved for the occasion in an easier to reach area), will have to kiss.

Also, anyone who would like to know how their health will be in the future year should chop an apple in half on Christmas Eve. If the fruit had worms, it was believed that the person would be followed by sickness.

There’s another tradition that involves reading the future. On November 30th, people plant some grain seeds (inside their house in a recipient) and they have to care for it until at least New Year’s eve. The higher and nicer it grows, the better next year will be.

Housewives know that the whole house must be cleaned a month before Christmas. After that they are no longer allowed to sweep, because an old superstition says that this is how luck is driven out of the house.

You’re also not allowed to throw any trash away on January the 1st, for the same reason.

Since the Roman Calendar, the beginning of the new year has been celebrated with big parties. The New Year’s Eve meal must be the most lavish, champagne glasses are clinked and fireworks are set off.

Firecrackers banish the evil and old from the ending year, and candles and fireworks light up the new year to begin under the best auspices.

Tradition says that on New Year’s Eve you must wear new and beautiful clothes (including red underwear for good luck) and have money in your pockets, so that the new year does not catch you poor.

It’s also good to know how to wish somebody a Merry Christmas or a Happy New Year – so make sure to read my article on that topic also.

The Romanian “sorcova” is basically a small wooden stick decorated with paper flowers. On January 1st, children in Romania visit adults and wish them well, while gently hitting them with the Sorcova on the shoulder or head.

There’s a short poem that they must recite – wishes of good health and prosperity in the new year – and for that, the children receive money generally. Probably in the past it wasn’t money, but food items and such.

Extremely numerous and varied customs, traditions and superstitions are inherited in Romania, which must be strictly followed by the bride and groom if they want to have a trouble-free marriage.

I wrote more in depth about weddings in Romania in another article and you probably know that we didn’t follow most of the traditions. Now it’s time to learn them all!

The day before the wedding, the decorations for a wedding tree are prepared at the bride’s house, and on the morning of the wedding, this tree is decorated with ornaments by the young people present at the event.

It is brought on the wedding day to the church, and then it will be placed at the home of the bride and groom. Those who pass by the house in the coming weeks or months will know that a newly married family lives there.

It symbolizes the vigor, freshness, and abundant life of the two young people. The tree is usually a pine tree, so feel like it’s Christmas all over again!

It is also said according to the Romanian tradition that the bride must not turn her head back on the way to the church, so that she does not regret getting married.

Also, when leaving the church, the groom must not separate from the bride until returning home. That way they will never come apart from each other.

There is also the tradition of throwing candies, wheat and rice over the bride and groom in the church and when leaving the church. This custom brings good luck and prosperity in the lives of the newlyweds.

During the weeding party itself, we have the tradition of stealing the bride (for whom the groom and usually Godfather have to “pay” a ransom ranging from money – rarely done nowadays – to bottles of whiskey or all sort of funny dares).

However, it is very difficult to follow every single wedding custom and tradition. On the one hand, due to the multitude of traditional practices present in each area of the country, but also to the differences from one region to another.

You can choose among them those that you consider more attractive and more compatible with the event you are about to organize, but all of them can be an interesting experience.

One of the most beautiful Romanian traditions (a unique one too!) is the celebration of the arrival of spring.

The “Mărţişor” is an ancient symbol, which marks the arrival of warm weather in the Romanian lands. It is always celebrated on March 1st.

In popular belief, this talisman has magical powers. The men offer these brooches to the women, and they wear them on their chests throughout the month of March.

Lately, they make them more as bracelets, but their original form is also kept.

The “Mărţişor” was designed as an amulet linked with a string weaved from two threads: one white (symbolizing divinity, health, soul purity, and satisfaction) and one red (as a symbol of love for the eternal beauties of life: friendship, fidelity, and honor).

According to popular tradition, the two colors (white and red) also signify the two primary seasons (winter and summer), whereas spring and autumn are just regarded passing seasons.

Romanians are extremely proud of their heritage. They tell travelers and tourists all about their home region’s customs and parents make sure their children practice or at least know about them.

Of course, there are many other traditions here in Romania – and you might know of some also. I will gladly read about them and maybe feature them in the article in future updates.

So if you know of any additional Romanian traditions, please share them with us in the comments section!