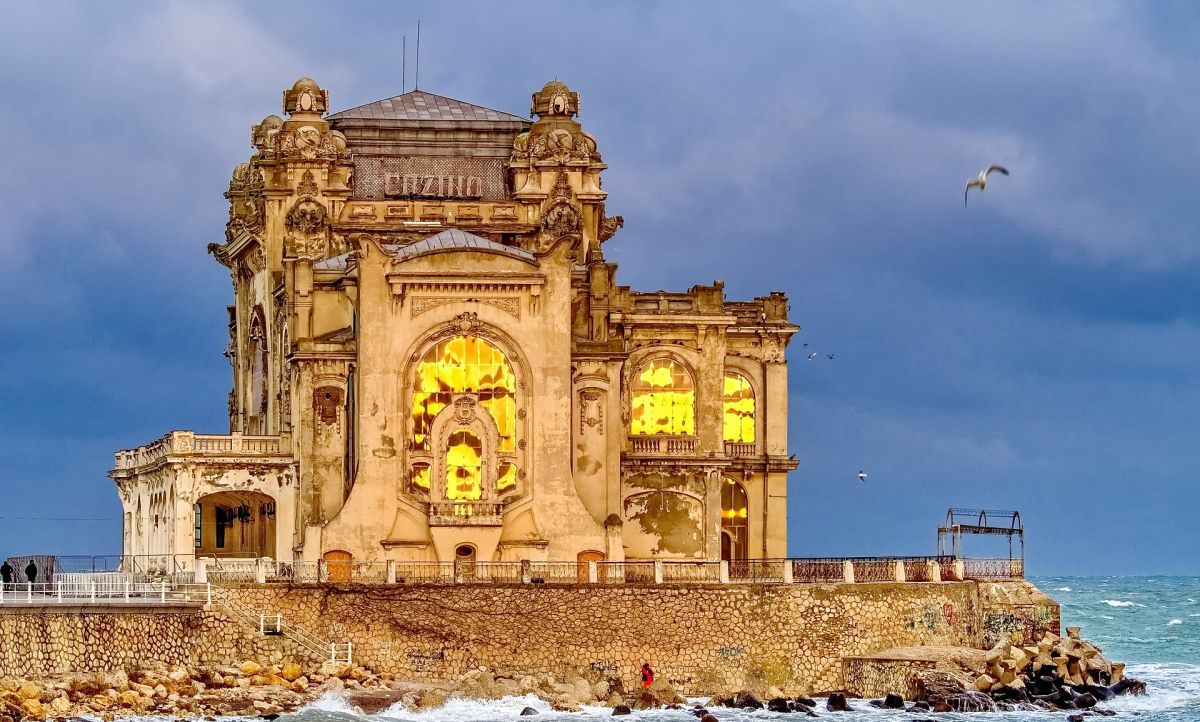 Constanta, historically known as Tomis, is the largest port on the Black Sea coast and a popular destination for summer holidays. Pleasant temperatures, combined with the refreshing breeze of the sea, draw vacation-goers and tourists from all over the world.

While visiting this historical coastal town, you will most likely fall in love with its sandy beaches, archaeological treasures, and alluring museums.

In terms of entertainment, Constanta boasts a live party scene, with nightclubs, bars and open-air parties. The atmosphere of the old town center is almost intoxicating, and the proximity to popular beach resorts such as Mamaia adds to its overall appeal.

When visiting Constanta for the first time, you will discover there are plenty of things to do and see. Keep in mind that we are talking about an ancient town, which is worth exploring solely for its ancient ruins. Who wouldn’t want to visit a town that offers the perfect blend between the old and the new?

With these in mind, let’s move on and check out the…

Located in a prime spot on the seafront, the Constanta Casino was designed by architects Daniel Renard and Petre Antonescu. The building has been abandoned for some time, but the authorities are making an effort to rehabilitate it.

From outside, one can observe the art nouveau style of the building, taking delight in the sumptuous architecture. Around the casino, there is a pedestrian area, which offers a splendid view of the sea. You can take a walk and enjoy the air dance of the seagulls, almost tasting the saltiness of the air.

Even though still not rehabilitated, this building remains one of the main attractions in the city.

Built in 1910 by King Carol I, the mosque delivers one of the most impressive sights Constanta has to offer. As a result, it is also known as the Carol I Mosque.

Muslims, either Turks or Tatar by origin, come to worship their faith here. Each day, the muezzin climbs the steps to the minaret and makes the call to prayer.

Byzantine architectural elements decorate the outside of the building, and the interior is just as beautiful. A large Turkish carpet, a gift from Sultan Abdul Hamid, is the centerpiece of the mosque.

The minaret, with a height of 47 meters, offers a spectacular view of the harbor and the historic town center.

Bonus tip: if you like buildings of this kind, you might also want to visit the Hünkar Mosque. It was built in 1869 by an Ottoman Sultan for the Turks who had settled in Constanta after fleeing the Crimean War. The building also has a minaret, though not as tall.

Constanta’s old town has been recently restored, and Ovid’s Square can be found right at its center. Here, tourists can find the statue of Publius Ovidius Naso, the Roman poet who is well-known for his works of classical mythology. He was exiled to ancient Tomis, hence the connection to the city today.

The statue was designed by Ettore Ferrari, an Italian artist, in 1887. Decades later, an identical replica was created in Sulmona, which was the poet’s hometown in Italy.

On the statue, one can read a few lyrics written by the poet himself. Legend says that these were also engraved on this tomb, even though no one knows its location.

Apart from this, the Old Town area is perfect for checking out various stores, small but charming bars and pubs as well as all sorts of restaurants.

If you are curious to see what has remained of Ancient Tomis, a visit to the Archaeological Park might be a good idea. Located in an area with lush greenery, in the center of Constanta, it houses ancient vestiges. Near of the remaining towers, you can check out a map of Dobruja, which shows ancient cities of the area.

Tourists can walk on its alleys, discovering the history of the Tomis Fortress. There are columns and amphorae, capitols and tower fragments to be discovered and explored.

According to experts, these historical artifacts date from the Roman-Byzantine period. You can still see a part of the Roman wall and two gateways.

The Roman Edifice with Mosaic

History enthusiasts will appreciate the real Roman mosaics housed here. You can explore the vast complex, which includes three levels. Even though only a third has been preserved today, it offers a valuable insight into the world of Ancient Tomis.

The main point of attraction is represented by the colorful mosaic, but one can also see various artifacts and vestiges. Back then, the city’s commercial center was located here. There are remains of the Roman public baths exhibited as well.

The House with Lions

Walking around Constanta, you might want to add the House with Lions to your sightseeing list. Architecture lovers will appreciate the blend of architectural styles, as well as the four columns adorning the imposing lions.

Built in the 19th century, the elegant building was once used for the meetings of the Masonic Lodge. Today, it is abandoned and cannot be visited, but its exterior offers plenty of shooting opportunities for photography enthusiasts or those looking to spice up their Instagram Feed.

Located on the waterfront, the historic monument was originally built around the 1300s, in honor of the Genoese merchants who had established a flourishing sea trade in Constanta. It was rebuilt around 1860 at the order of the Danubius and Black Sea company.

The lighthouse has a height of 8 meters and it was in use until 1910. Today, it can only be observed from the outside, being considered a main attraction. On its walls, you can observe a Genoese ship (coat of arms).

Top things to do in Constanta

A visit to the National History and Archaeology Museum

You shouldn’t skip the National History and Archaeology Museum, which is located in the Old City Hall. Here, one can find an impressive collection of ancient art, including archaeological finds. The exhibitions dedicated to Dobruja are particularly impressive, offering a glimpse into both ancient and medieval history.

Archaeological vestiges of rare value are exposed within the walls of this museum. These include the Glykon Snake, the statue of an ancient snake god, statues depicting the protective deities of Ancient Tomis, the Sitting Woman and the Thinker, terracotta sculptures belonging to the Hamangia Culture.

A visit to the Romanian Navy Museum

The Romanian Navy Museum offers an interesting perspective on both the military and civil navy life. Visitors can explore the museum’s collection of ships and anchors, as well as the impressive display of knots, lighthouse bulbs and navy uniforms.

If you are traveling with kids, they might enjoy the mockup submarine. A tour of the museum is highly recommended, so you can see everything that it has to offer, including naval devices, torpedoes, and guns. There are also pieces from old ships and submarine models, ideal for anyone who is passionate about naval history.

A day of fun at the Natural Sciences Museum Complex

Families with children can plan an entire day of fun at the Natural Sciences Museum Complex, which includes the Dolphinarium and Planetarium, as well as an Exotic Birds Exhibition and a Micro Delta.

Nature enthusiasts will definitely enjoy the last two, particularly the Micro Delta, which offers insight into the complexity of Dobrogea’s fauna and flora.

The Dolphinarium is one of the most popular attractions in Constanta, especially during the summer. Visitors can watch shows with dolphins, as well as sea lions and penguins.

The Planetarium, along the Astronomical Observatory, offers a unique journey into the world of stars and galaxies.

A trip to the Constanta Aquarium

Opened in 1958, the Aquarium in Constanta houses over 100 species of fish and other sea creatures. There are exhibitions dedicated to marine wildlife, freshwater species, and exotic fish. It is located on the waterfront, vis-à-vis from the Casino, in the building that was once used as a restaurant.

If you decide to visit it, be sure to check out the basin that holds a collection of impressive sturgeons. Additional attractions of the marine section include sea horses and sea stars.

In the freshwater section, you can see many of the fish species found in the Danube Delta, including carp, pike and perch. Among the exotic fish the aquarium hosts, there are piranhas, spade fish, and knife fish.

A visit to the Museum of Senses

A rather new attraction of Constanta, the Museum of Senses is definitely something to add on your list. As described by the owners, it is a “wonderland of head-scratching illusions”, a place where your senses will be tested to the maximum.

Clearly, a trip to this museum is something the whole family can enjoy, including children. The interactive exhibits will challenge your imagination, and you might even discover new things about yourself and your level of perception. From mirages to upside-down worlds, fun is guaranteed!

Visiting Constanta during the summer? If yes, then sunbathing is a must. The area is known for its sandy beaches, with pleasant temperatures during the peak season. You will definitely enjoy the breeze, as well as the lively atmosphere, present day and night.

There are two beaches in the city, but the Modern one is the one that you should visit, as it is taken care of more than the other. Expect it to be very crowded at all times and consider the alternative of taking a short trip to nearby Mamaia (10 minutes away by bus) and enjoy the amazing beaches there.

I wrote about the best beaches in Romania, so make sure to check them out!

From the first hours of the day, you can hear music in the touristic areas. There are numerous music festivals taking place, as well as open-air parties, often right on the beach. For those who prefer nightclubs and bars, there are equally-interesting opportunities to explore.

Romanians like to party, as you will see for yourself, and you are always guaranteed to have a good time. You might even visit a cabaret for a unique kind of entertainment, depending on what strikes your interest.

These are almost everywhere during the season (usually starting in late May and lasting until mid-September) but almost non-existent during the rest of the year.

Passionate about sailing? You can rent a boat and cruise on the Black Sea, enjoying the salty breeze. Depending on your experience, you can go out to sea on your own, or accompanied by an experienced crew. Often, the same companies also offer scuba diving lessons, so you might consider this opportunity as well.

Constanta is a worthwhile destination, especially for sun and sea lovers during the season. It offers a bit of everything: fun in the sun, a lively entertainment scene, and historical exploration. Double-decker buses offer a unique sightseeing experience during the summer, and popular Black Sea resorts are only a stone’s throw away.

If you decide to visit, you can also choose Mamaia which is Romania’s top seaside resort. If that’s the case, make sure to check out my recommended places to stay in Mamaia.