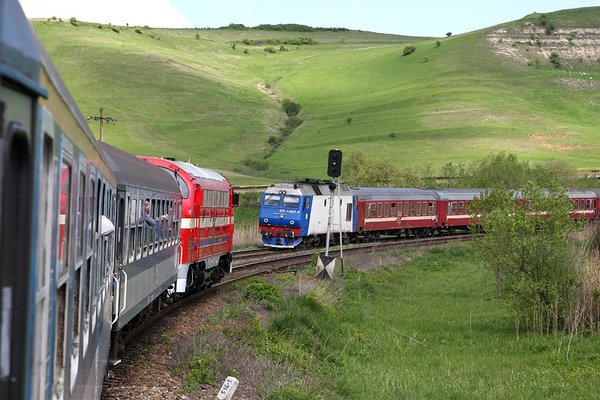 As regular readers know, I am a fan of traveling by train and I probably use the Romainian trains several times a year to get to my destination, usually on the route Timisoara – Bucharest (and back). Even better, I have traveled by train in other European countries, so I can really compare the services offered in Romania to those usually considered better in Europe – and this is exactly what I plan to do today.

So if you are looking to travel by train in Romania – or you have to, I am here to give you the good, the bad and the ugly about the trains in Romania. Let’s get it started!

What I like about traveling by Train in Romania

– First, it’s the thing I like about traveling by train anywhere in the world: you get more room to stretch your legs, you can get up and walk and generally feel better than you would if you were to take a car, bus or plane to your destination. Even better, the carts are not usually packed, so you have your room to breathe and you can even change seats if you want to.

Have in mind, though, that first class in Romanian trains is nowhere near luxury and some older first class carts are now used as second class on some trains. But it’s still a good option, price-wise as well.

– Unless you’re taking Regio trains (slow and old), they usually have at least decent air conditioning and especially great heating so you should have a comfortable ride.

– Even though the overall speed of the trains is slower than what you’d like and some rides take a loooong time (since Romania is a pretty large country too), the connections are usually good and you can get to any interesting destination in Romania by train. In other words, you can easily travel and explore even if you don’t own a car!

– New private companies are starting to offer even better prices, modern trains and overall better value (perfect air con, cleanliness, free wi fi and so on), even though at the moment their destinations are limited. Look for companies like Softrans, Regiotrans or Astra Trans as these are the current private train operators in the country.

– The trains and carriages are in a pretty poor condition: expect them to be pretty dirty and expect stuff not to work properly – like the electrical doors, the water faucets in the toilets and so on. And yes, sometimes the toilets are a nightmare to visit!

– They rarely get to their destination on time. There are horror moments when trains that travel on very long distances can get delays of 90 minutes and sometimes more. And even other trains use to get to their destination at least a few minutes late – the longer the distance, the higher the chances of not getting there in time, so make sure to leave enough time in between trips if you need to make a connection.

– Although Romania is one of the countries with the fastest internet in the world, there is no WiFi in the state-owned trains. Some of the private companies are starting to offer free Internet in their trains, but there’s still a lot of work to be done here.

Sometimes, things can get really ugly when you’re traveling by train in Romania. This happened a couple of days ago to me during a short return trip to Craiova: I took an early morning train to the destination, one that left the Drobeta train station at 6 AM.

I was shocked to find out that the lights were not working anywhere in the train and neither did the heating: so the conductor was sporting a cool flashlight to check out the tickets, while her teeth were chattering because, you see, the weather is pretty cold in Romania since it’s winter.

It was insane – and it never happened to me before, nor I heard it happen to somebody else. Still, I was there and it happened and we rode in the dark for almost an hour until the sun came up.

So I had to – just like tens of other people – stand for the entire duration of the journey. The fact that all cars were packed also meant that the air con was not working properly, so it was insanely hot and the air was sultry. Overall, it was a nightmare. So things, if you are terribly unlucky, can get really ugly when it comes to riding a train in Romania, but usually you won’t have to go through bad things like those I went through.

How to Get from Brasov to Timisoara (and Timisoara to Brasov)