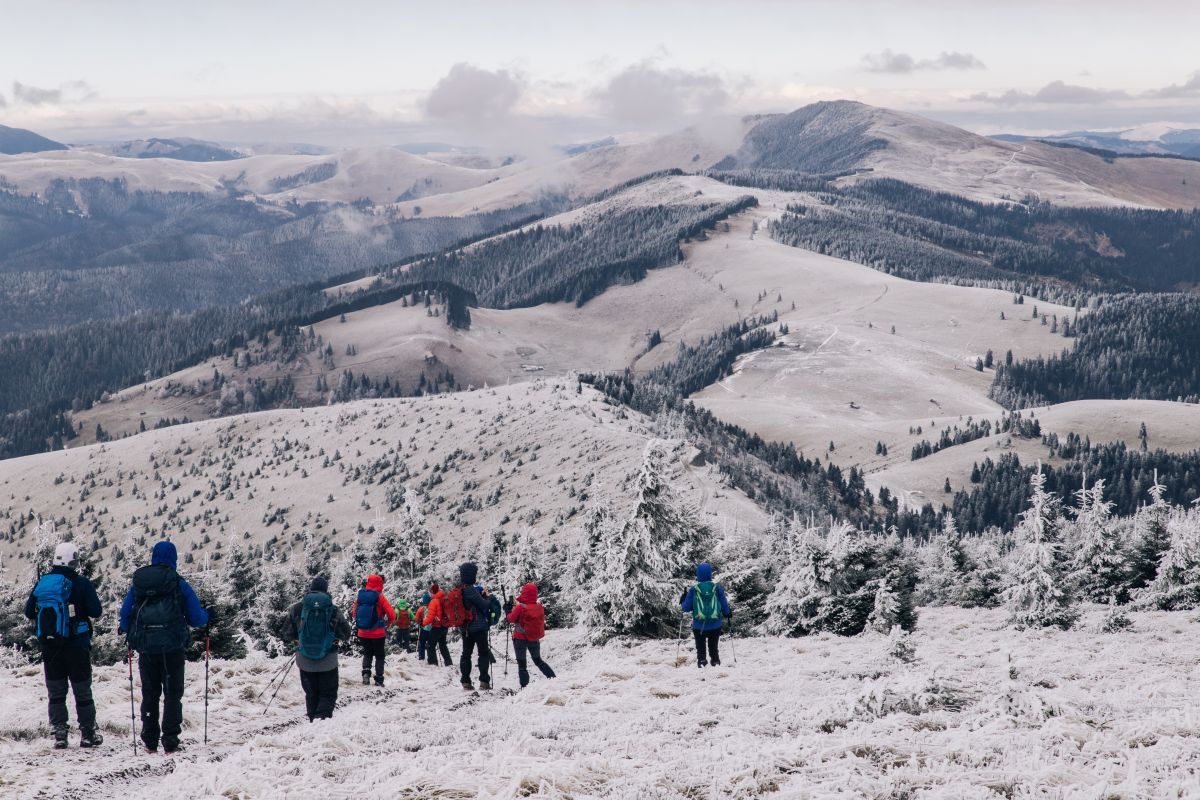 I am updating this article about winters in Romania during an atypical nearly winter day: the sky is clear, the sun is shining and even though the temperature is of 16 degrees Celsius, it’s still warmer than usual.

In the past, winters in Romania came with fairy tale-like snow and cold weather, with cloudy skies and sometimes extreme temperatures. But in these past few years, with the climate changing, it’s difficult to predict what will be.

I’ve seen in the pat two or three years that winter starts later – and summer lingers into the fall season too.

As a result, winter seems to begin in January and last until March-April, when it’s no longer uncommon to have snow. In the past two years, we actually saw snow for the first time (in our area – in Drobeta Turnu Severin and later, Constanta) in March!

So the weather is indeed changing and winters surely no longer seem to be as they used to. They are definitely warmer and with less and less snow – that is a fact.

All in all, it’s really difficult to paint a very clear picture about winter in Romania – but I will try to do that, based mostly on how it all went in the previous years, but with notes about present changes and estimations.

One thing is clear, though: the weather during the winter differs depending the region you’re living in or planning to visit: the mountain resorts have plenty of snow and are great for skiing, with the Southern parts of the country being generally warmer and more affected by the climate change.

So, depending on what you’re looking for during winter time, you can have it all: from heavy snows and cold weather to slightly warmer weather and little to no snow.

How Cold Does it Get in Romania During the Winter?

Winter in Romania lasts from December to February, with January being usually the coldest month of them all. I’ve noticed a slight delay in this, with very cold weathers stretching up to mid-March.

The average temperatures during the winter vary greatly based on elevation and the location of the city in Romania: mountain resorts and the areas caught between the Carpathian mountains, as well as Northern parts of the country are way colder than the bottom area (South-west, South and South-East).

In Bucharest, for example, the average temperature during winter is about 1 degree Celsius (historically, as in recent years it’s been warmer), while in Brasov, the average is under 0 degrees Celsius, while Timisoara is warmer at around 3 degrees Celsius.

Still, the temperatures are very close and the few degrees won’t really make a difference.

Or at least they did not until recently when we had temperatures of 17 degrees Celsius during the winter, while the mountain resorts were below freezing.

In conclusion, choose the mountains and the Transylvania region if you want colder weather and more chances for snow, or go in the cities to the South if you want higher chances of warmer days, more sunshine and less snow.

There’s not guarantee anywhere, though: I still remember a horrible winter several years ago when in my city, there was an extreme cold wave that saw the temperatures drop to some -23 to -26 degrees Celsius, the coldest I have ever seen.

Our water pipes froze and it was miserable overall… so you can never really know!

Does Romania Have Snow During the Winter?

Generally, yes, Romania has plenty of snow during the winter (December to February), although the mountain resorts will usually have snow up to March and April.

When I was a kid – many years ago – there was always heavy snow during the winter and we built huge snow forts and had a lot of fun with it as it lasted the entire winter.

As years passed, the quantity of snow in my area decreased a lot and probably that’s the same for most non mountany places in the country.

But there was no year, since I was born, without snow. We had none this year so far, but the winter is far from over and most likely there will be snow sooner rather than later.

Or this will be a historic year with no snow in Drobeta (hope not, because my son has his sleigh ready!)

In Conclusion, Romania has snow during the winter in all cities. Again, more snow is expected up the mountains and in between the Carpathians.

How Cold Is Romania in December?

Since this is the month where the Christmas markets take place – followed by the New Year’s celebrations, many choose it as the winter month to visit Romania.

Generally, December is really cold and there’s usually snow during the month – but usually closer to Christmas and not before.

The mountain resorts will have snow at the beginning of the month, so if you’re up for winter sports and the like, you won’t be disappointed.

Also, most of the cities that make it on the “Best list” (like Brasov, Sibiu, Cluj Napoca) will have plenty of snow, as well as winter-themed attractions and things to do.

Back to how cold is Romania in December, you can expect lows of up to -10 degrees celsius (during the night and mostly up in the mountains) and highs up to 5-6 degrees (although as I said, these past few years came with higher than usual temperatures).

All in all, winter in Romania is just as you would expect it to be in most parts in Europe: generally cold, with plenty of snow, but also with tons of activities and attractions that are related to the winter, including an ice-made hotel that can be booked over the winter and many others.

In the past few years, mayors of the larger cities seem to be in a competition for decorating their cities for Christmas, so expect a lot of lights and decorations that make everything look even better.

There are also dedicated Winter or Christmas markets in all major cities (and even smaller ones), and those are great opportunities for you to test out some traditional Romanian foods and drink mulled wine, boiled Tuica and much more.

So, in conclusion, Romania during the winter is magical and I am sure you’ll enjoy it if you decide to visit during this time of the year.

If you have additional questions – things that I haven’t covered or anything else, don’t hesitate to let me know by commenting below!

4 thoughts on “What Is Romania Like in the Winter?”