No matter if you’re planning to visit Romania for a vacation or you’re planning to relocate here, there are quite a few cities in Romania that you should visit and I have decided to create a list of those that I consider “must see” in our country: the best cities to visit in Romania. And, of course, I’m sharing it with you!

Unfortunately, the communist spell that Romania was under until 1989 has left most of our cities with completely unspectacular concrete blocks that look horrendous, a relatively poor infrastructure and few more modern attractions, even though things have improved dramatically since Romania joined the European Union.

What I am trying to say is that if you come to Romania hoping to be impressed by the architecture and the cities themselves, you will most likely be disappointed – unless you really like looking at apartment buildings from the communist times. On the other hand, if you come with lower expectations, you might actually be pleasantly surprised.

The truth is that most of the larger cities have that “old town” – the city center actually, where you can still find a bit of charm and things are getting even better lately, with renovations turning nearly derelict buildings into eye candy. And if you you want to know for sure if you’ll like them or not, there’s just one way to do it: come visit the country!

If you still don’t know exactly where to start your adventure or which are the most famous cities in Romanian that you should visit, I’m here to help. Here are the best cities to visit in this country:

I won’t write too much about Bucharest, as there are quite a few article about it on this blog, including the complete overview of the city – so you should check it out if you want even more details.

I will say that Bucharest is the capital city of Romania and one of the most developed cities in Romania, as well as the largest. You can see there the famous Casa Poporului, explore the Old Town with its charming streets and great restaurants or simply stroll around trying to find a hidden gem that’s off the beaten path.

The architecture itself is not very impressive but you will surely never get bored here, especially since recent and pretty much chaotic development over the recent years offers some amazing views, like an ultra modern high tech building with a German-inspired, beautiful old building to one side and a completely ignored, almost ruined house to the other.

We can say that Bucharest is a city of contrasts, one where anybody can find something to love or hate.

Many people consider Cluj Napoca to be the most charming city in the country (fighting a close battle with my next recommendation). Hosting Romania’s arts and cultural centers, the tallest church in the country and, especially in the central area, some amazing buildings and nice attractions, Cluj is really a city worth visiting if you ever come to Romania.

The people living there are considered to be more laid back than those in the rest of the country, more educated and with a more “western” mentality (not as in Cowboys, but Western Europe).

Plus, the food there is absolutely delicious thanks to its Hungarian influences and recent developments have really improved the already vast offering in all areas.

Elegant and romantic, with fortified churches, castles and art museums, Cluj is that type of city that you risk falling in love with! I wrote more about it here, so make sure to check that article as well to get a better understanding of Romania’s gem.

After being elected the Cultural Capital of Europe back in 2007, Sibiu grew in popularity among Romanians and foreigners and fortunately it managed to improve a lot as a city too.

With Gothic architecture and a cosy feeling (even though it’s a large city), Sibiu offers some impressive attractions like the Brukenthal Palace – one of the oldest museums in the world.

It still has a bit of that medieval feeling alive and kicking in the areas that haven’t been touched by the communists and it is considered by many the most beautiful city in Romania (probably those who don’t consider Cluj to be the one). Either way, it’s definitely worth visiting so make sure to put it on your list.

One of our readers moved to Brasov recently and himself, as well as his family, loved the city so it’s guaranteed that you’ll love it too!

The central area, home of the Black Church, is absolutely amazing, while the surroundings are even better: you have mountains on the sides offering breathtaking views. There’s also the famous Poiana Brasov just a stone’s throw away, a resort that turns into a real winter wonderland and comes as an added bonus when visiting the city.

You can also find the Rope Street in Brasov – the narrowest street in the country (considered by many the narrowest in Europe / the world) – as well as many other attractions and great places to taste delicious food and/or enjoy your time.

Although the city itself is not insanely spectacular, it still has a lot to offer thanks to its close proximity to the sea.

Actually, it’s right by the Black Sea, within walking distance to the country’s most popular resort, Mamaia and close to every other resort and village by the Black Sea (as well as our Bulgarian neighbors with their set of beaches and attractions).

The city managed to grow a lot in the past few years and looks a lot better than it did in the past, so you should definitely visit it during the summer – and make sure you make a day trip to Mamaia and enjoy the beaches, even though it’s the most crowded time of the year.

It’s time to start looking at cities that are not usually recommended by guides or other people, but places that are definitely worth a visit since they are indeed truly spectacular. Piatra Neamt is one of the hidden gems of the country, situated in the Moldavia region.

A smaller city (around 80,000 people live there), Piatra Neamt is surrounded by beautiful hills and forests, also offering a breathtaking gondola lift to the nearby Cozla hill, where you can ski during the winter.

The city itself is one of the greenest in the city (“green” as in parks and green spaces) and it’s also close by to the Ceahlau and Vanatori national parks, the charming Neamt monastery and basically opens up the road for visiting some of the greatest monasteries in Romania. It’s not one of the easiest cities in Romania to get to by train or car, but it’s certainly worth all the trouble of getting there!

Just a few years ago, I would’ve said that Alba Iulia is one of the ugliest cities in the country, but fortunately things have changed a lot after its entire central area and surrounding citadel ruins have been modernized with EU funding.

Now it’s a real joy to visit the city and there’s a lot to please the eye! And it’s not just the renovated central area and the beautiful ruins nearby the city, but also an impressive natural park (spread over 20 hectares) where you can admire over 1,000 different species of plants and trees, enjoy the nature and realize that Romania’s not bad at all. 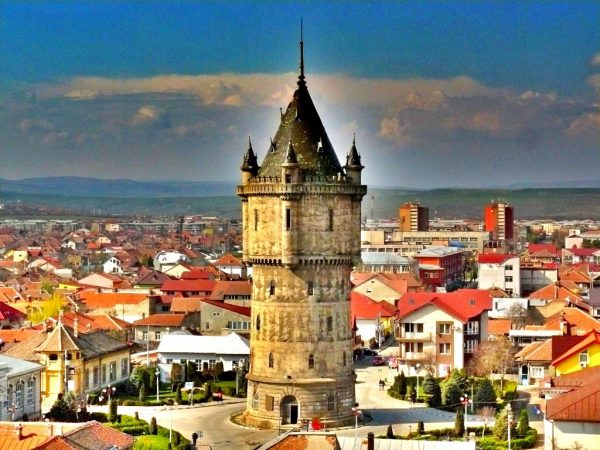 I am, of course, a bit biased with this recommendation, as it is my home city, but it’s definitely worth a visit for a weekend at least. You’ll see everything there is to see about this city in one afternoon, but you’ll be impressed: we’re talking about a city that’s clean, never crowded and quite beautiful, situated right by the Danube river.

It’s also really close to Orsova – a small town that you have to visit if you get here, especially for the ride on the Danube and then go even further (just a bit) either to Baile Herculane for some refreshing thermal baths or visit the world-known Bigar waterfall.

We complete the list of the best cities to visit in Romania with the medieval town of Sighisoara, which is considered one of the best preserved medieval cities/towns in Europe! The town’s center is considered an UNESCO heritage site and that’s the place where the famous medieval festival takes place every year at the end of July (the last weekend of the month).

Again, unless you go there for the festival, you won’t have many things to do, but you should definitely visit it for the blast from the past – and if you’re planning a visit, make sure it’s during the festival when everything is ten times more awesome and you really think that you’ve made a trip back in time!

Most of the lists available online, as well as suggestions that you might get from people living in Romania, will usually stick to the biggest cities in the country: Bucharest, Cluj Napoca, Timisoara, Constanta, most likely followed by high rising (in popularity) Brasov and Sibiu.

The truth is, as you saw above, that there’s a lot more that Romania has to offer and sometimes, staying away from the beaten track might come with some pleasant surprises. So even though I perfectly agree with visiting the larger cities first as that’s where the action is (and usually these are the most improved in recent years), you should still consider some other options.